I have been trying to stash bust in an effort to keep my studio neat and tidy, and to avoid accumulating too much yarn.  The pattern is the Kaleidoscope Shawl, and it's free on Red Heart's website.  When I saw this simple pattern, I knew it would be great with the skeins of Red Heart Boutique Unforgettable that I bought on clearance a few months back.  It's basically 5 rows of granny, then 5 rows of 'every other' double crochet net, with a picot shell border.  It works up really quick and easy, and I love how it shows off the colors in the yarn.  I think it's going to my lovely sister in law. 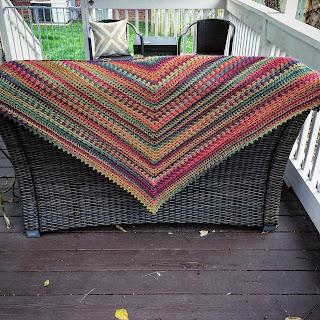 Posted by Jennie at 1:21 PM No comments: 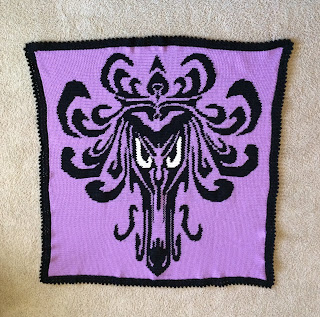 I tackled a great big scary new realm in the world of crochet.  (Well, scary for me.)  I created my first graphghan!  It is a gift for a friend who just got married.  Neither her, nor her husband, wanted to keep their own names when they married, but neither liked the other's last name either, so the decided to pick a new one together.  They are both Disney fanatics, and love the Haunted Mansion, so they chose to use the name of the fictional owner, Mr. Gracey.  Clearly they needed something both cozy, and a little bit macabre for their very own Gracey home, so I chose to use a portion of the wallpaper in the Haunted Mansion as my inspiration. 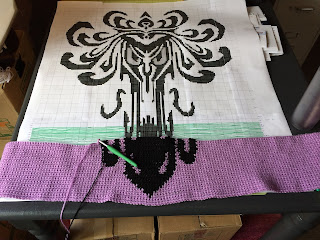 I created the graph in Stitchfiddle.  It is 175 single crochet stitches across in each row, and was 188 rows tall.  (The graph was really 185, but included 3 empty space rows at the top, but none bottom, so I added 3 black rows down there.)  I felt like the graph looked fine when I printed it out, but once I got working on it I discovered bits where I felt the colors should change to create a more graceful curve, or even off a line, so I altered it a bit as I went, using black and silver sharpies to alter the graph, so it is not identical to the graph you see below. Once I completed the graph, I realized I needed some sort of gothic lace border, so I used this pattern on The Spruce Crafts, V-Stitch & Picot Border. 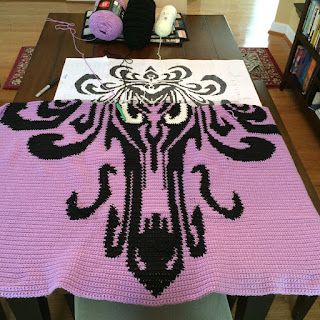 The body of the graphghan was done with Red Heart Super Saver in black and orchid.  It took 2 Jumbo skeins of orchid and 1 Jumbo skein of black.  I had just a bit of each leftover.  Rather than go out and buy more of it for the border, I used some Vanna's Choice in black to do that part.  I don't think you can tell that they are two different black acrylics in it.  They eyes are Caron Simply Soft in Cream that I had in my stash. 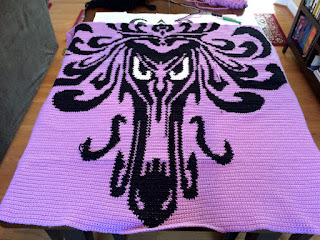 I'm thrilled with how it came out, but I'm also quite glad to see the back of the project!  It took me a lot longer than I thought it would, about 8 weeks.  I haven't measured it, but it is about 42" wide x 50" tall. 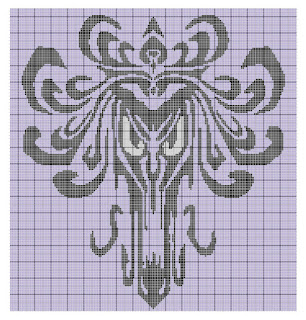 Posted by Jennie at 1:30 PM No comments: