I just completed organizing the Decked Out for Deathly Hallows Swap with Ex_Gratia & Pinkleo in preparation for the release of Part I.  The swap required 1 wearable item to don for the premier, 1 game, toy or accessory to play with while waiting in line, and 1 edible item to enjoy during the film.

My wonderful partner Andromeda007 wanted a game she and her husband could play together or with friends.  My husband Jim loves playing games while I do not, and he pointed out that a kitschy HP themed game would just gather dust.   He also pointed out that to get a game that was fun to play, you would have to test it a lot to make sure it didn't go on for hours, or be over in 5 minutes.  That it should be easy to learn but still pleasurably challenging to play, etc.  In the end, he proposed the idea of a Piecepack.  A Piecepack is the board game equivalent of a deck of cards.  It is a set of pieces that can be arranged in nearly limitless configurations, and allows users to create their own games with it, just like you can play poker, eucher, hearts, bridge, etc with a single deck of cards. 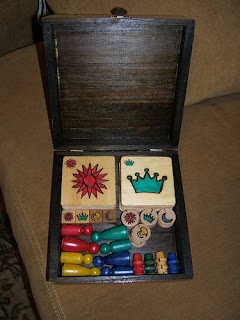 I wanted my game to feel old, in that way that many things in the world of Harry Potter are timeless.  I settled on making all the pieces out of wood.  I was able to pick up most of them at the craft store, but the 3" wooden tiles needed to be ordered offline.  I got mine at Craftparts.com.  I created the images for the coins and tiles in Photoshop, then flipped them over digitally and printed them on a laser printer.

I used the transfer tip on the wood burning tool to transfer them to the pieces.  Most of the pieces were then woodburned with a detail tip, though the tiny suits in the corners of the tiles were just too small to burn. I traced them with a black art pen that doesn't bleed when used on wood.  All the pieces were painted with a thick coat of watercolor, so the wood grain would show through.  Then the empty areas were stained with Chartpak wood stain markers which I freakin' love.  (They are available in tons of colors at Michael's).  I also gave them all a few coats of a clear acrylic to protect them.

The really neat part about it is that it is in the public domain, so anyone can create games for it, and most get added to the games page at www.Piecepack.org, and sites like it.  The game set already had 4 suits, which I felt were *mostly* already HP themed, and just needed a tiny bit of tweaking. 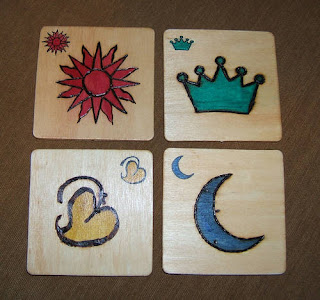 The firey red sun for Gryffindor.
A majestic blue moon, for the Ravenclaws.
The green crown for the ambitious Slytherins.
And the suggested fleur-de-lis traded out for a yellow leaf for the earthy Hufflepuffs. 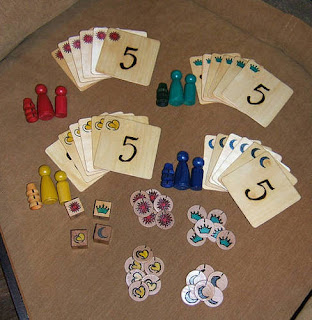 Each piecepack is supposed to have 4 pawns, which I made out of the smaller wooden people I found at Hobby Lobby.  But when I ordered the wooden tiles online for the board pieces, I saw the "2.5" tall girls", which are the larger set of pawns.  I thought they were so cute, and looked like they could be figures in robes, so I made an extra set of pawns.

Some of the piecepack games require a set of game pieces called an "Icehouse Set", which are 4 sided pyramids, made of plastic.  I didn't want to order the sometimes expensive pieces, plus I didn't think they being plastic would fit with the feel of the wooden game pieces I had already created.  So I used wooden flower pots, with a gouge mark burned into them.  When you stack them with the gouges all facing the same way, you get which way your player is facing in the game.  Purists might not like my plan (Jim didn't).  But I think it's a good compromise to the pretty wooden set.

Here are some detail shots of the coins and dice: 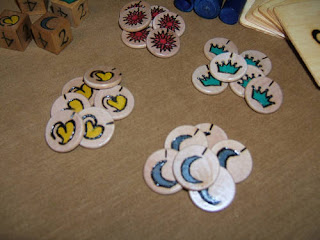 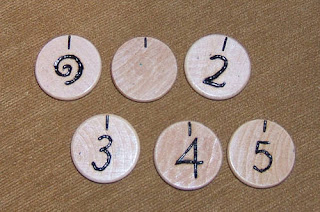 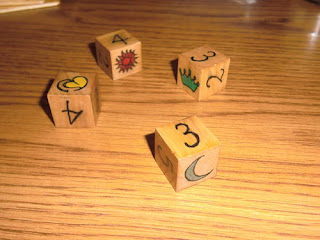 Since the games are all in the public domain, it's also okay to tweak them as desired.  Jim found me a "Wizard's Dueling Game", which I felt was practically written with Harry Potter in mind.  I retyped the rules, changing a few names & terms to suit the theme, and ended up with a game I called "Dumbledore's Army", which allows you to practice Stunning, Disarming & Shield Spells in the Room of Requirement.   ;)

I knew I needed to make a container for all the parts and pieces to the game.  DH suggested a drawstring pouch, but since he had just bought me a new wood burning tool, I opted for a wooden box, that I burned then stained with Chartpak woodstain markers. 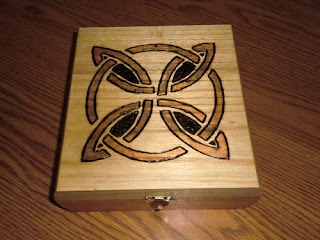 If you're interested in games, be sure to check out www.Piecepack.org for various games, printable pieces, and more.  (I'm in no way affiliated with them, I just found their site very helpful!)

Posted by Jennie at 9:50 AM No comments: