I created three of these ornaments for my partners in the HP Holiday Swap.  I wanted to create something iconic from the Harry Potter books, but also keep it simple and understated.  Something subtly geeky, that could be just a beautiful ornament on the tree, but extra fun for those of us who recognize the scene. 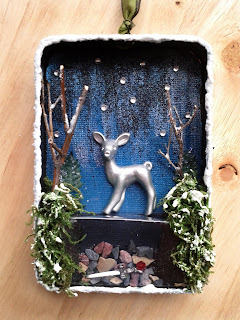 For those of you who don't know the books, the scene comes from a moment in the 7th novel, where Harry is feeling sad and abandoned by his mentor; truly alone in the world.  At that moment a Silver Doe appears to him, walking among the trees outside his tent.  Despite the fact that he is on the run, pursued by evil wizards, he knows that the Silver Doe means him no harm, and is there to help him.  He follows it, and is led to the Sword of Gryffindor, which he needs in his quest to take down Voldemorte. 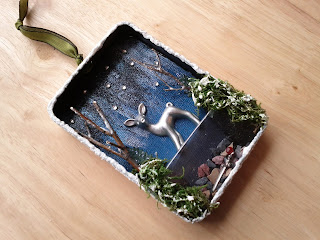 I really should have thought to take process pictures, so that I could create a tutorial, but I worked on them while listening to audio books on my phone/camera, so it slipped my mind!  But I'll relate as much as I can remember.

It all started when I saw some adorable resin deer charms on Alpha Stamps website.  As soon as I saw them I knew I wanted to create an ornament based on the Silver Doe. 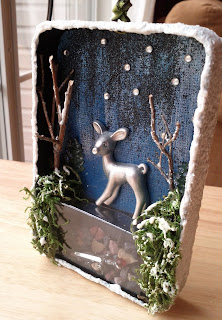 Next I needed a base to build on.  I tried peanut butter jar lids, but they weren't quite deep enough to create the underwater area for the Sword.  I looked for a small wood or paper-mâché form to use at Joann Fabrics, but nothing was the right size, shape or depth in that department. My husband eventually found gift card tins in the Christmas aisle.  Perfect size & depth!

Since I couldn't find any light colored ones, I spray painted the backs and sides silver.  (I also spray painted the Does at the same time, because they were turquoise rather than silver.) After the paint was dry it was time to make the backs and sides snowy!  I mixed a few drops of white paint into some glossy mod podge, then poured in a TON of white/translucent glitter, until I had a gloopy paste.  The outside of the tin got 2 layers of this treatment with a purple-ish white glitter, then the final outer coat was done with a slightly more yellow-pink white glitter, so there is more depth to the snow, with the brightest layer on top, but the under layers peeking through. 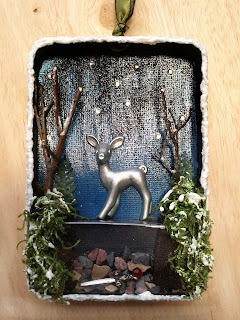 Next I cut a piece of deep blue cardstock for the back of each, and did a layer of silver mineral powder mixed with mod podge coming down from the top, fading out, and over that a layer of black glitter mixed into mod podge to add some depth and darkness to the sky.  The stars are tiny self-sticking jewels from the scrapbooking section.  I painted the inner sides of the tin with black enamel craft paint, then fitted the blue background papers into place. 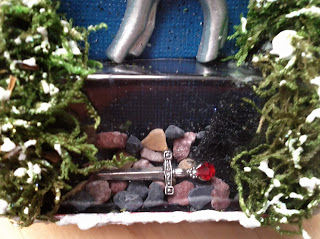 The big problem was how to create an area that was "underwater", for the Sword to be resting in.  I ended up cutting some floral foam to be the land area on the sides and painted it black.  Then I glued some small pebbles onto the bottom, and part way up the back.  (These were also from the floral section at Joann's.)  The swords are charms from my stash, and I glued a tiny Swarovski crystal to the top of each, since the Sword of Gryffindor is set with rubies.  Next I dug through the recycling and found some plastic packaging that was the right size & shape.  I basically wanted an "L" shape of plastic, so the Doe could stand on the top of the pool, and the underwater area would be covered as well.  I cut the plastic wider than I needed, hit the edges with some E-6000, and then stuck it into the floral foam. 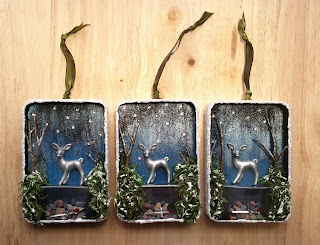 Now that the underwater scene was set, I glued the Does in place, and added a layer of spanish moss to each of the banks, covering the edges of the plastic.  After that was in place I walked around the grounds of our apartment complex until I found shrubs with branches the right size to be tiny trees.  Each of the trees and the spanish moss got a light sprinkling of the mod podge-glitter snow.  Finally I popped 2 holes in the top with jewelry hole punching pliers, and threaded through some iridescent olive green ribbon to tie in with the moss.

I have to admit that I lost heart in the middle of the project, worried that they were just NOT going to turn out as they existed in my imagination.  But by the end I was thrilled with them, and sad to see them go.  I wish I had thought to make 4 at the same time, to keep one for myself.  I do have one of the Does left, so perhaps I will pick up another tin and do one for me.  If I do, I'll be sure to take process pics and update this thread into a tutorial.
Posted by Jennie at 9:24 AM No comments:

Steampunk Birdhouse In Your Soul ATB

I recently participated in the Artist Trading Block Swap.  For those of you who are wondering, an ATB, is basically a 3-D version of an ATC (Artist Trading Card).  A small work of art, to be given away and shared.  While stalking my partner's Pinterest I noticed she had pinned an altered art tag, which had the lyric "Make a little birdhouse in your soul" on it.  If you are unfamiliar with this brilliant song by They Might Be Giants, you can watch the video on Youtube.  A brief explanation is that the song tells the story of a nightlight, which watches over its owner while they sleep.  The night light tells the listener to make a birdhouse (being a safe place for something small and vulnerable) for the light it creates in their mind and soul.

And after seeing noodle-bug's amazing hand stitched Birdhouse for Your Soul, I knew I had to completely steal ahem, take inspiration from her example and create a Steampunk Birdhouse for amaryllisroze's Soul.

The front contains an antiqued blue bird in a frame, as a reference to the lyric "Bluebird of friendliness", and a set of antiqued chipboard letters. 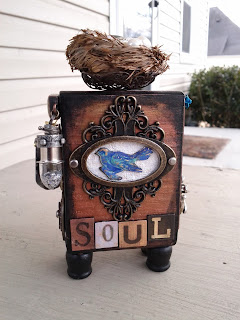 The first narrow side includes a window looking onto an Edwardian lady, and a metal bee, as a reference to the lyric "Say I'm the only bee in your bonnet." 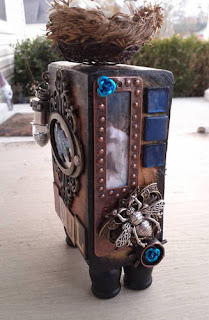 The back contains a 3-D metal birdcage with a delicate Swarovski crystal heart dangling from it, in reference to the vulnerable parts of ourselves which we try to sheild. 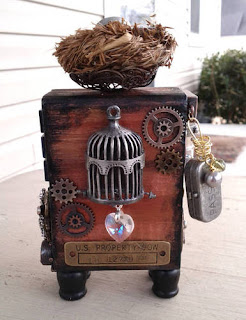 The final side contains a bit of ruler, with a tiny hinged tin box that says "passion", and a light bulb full of glitter which is a reference to the fact that the song is told from the point of view of a nightlight.  Below that is a "Cherish" token, a clock, and the symbol for infinity, which references the line "My story's infinite".  While I was working on it, I searched high and low for a picture or embellishment with a lighthouse on it for this side, but seemed to be thwarted at every turn.  Of course I found the perfect one 2 days after shipping it.   :P 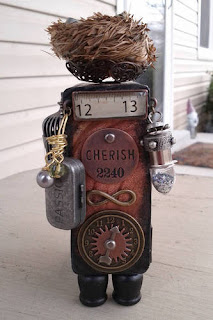 And finally, the whole thing is topped with a small bird's nest, which contains the Ace of Hearts, a gear, watch hand, a button, and freshwater pearl "eggs".  I had a devil of a time getting the nest to stay on top, so I ended up using a Vintaj brass embellishment, bent up into the shape of a bowl to support the nest. 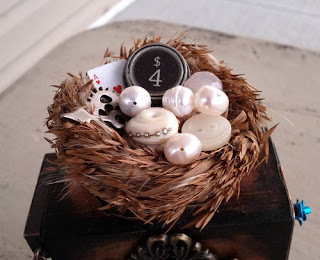 Posted by Jennie at 9:00 AM No comments: