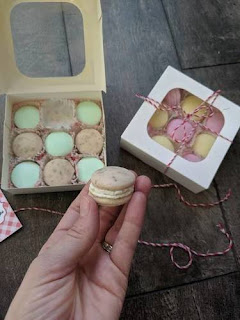 I have a problem.  Whenever I watch the Great British Bake Off, I want baked goods.  During cake week I want cake.  During biscuit week I check the pantry in case cookie faeries came while I was out and left me something delicious.  During bread week I resort to making cinnamon toast while watching the show.  So when I joined the Great British Bake Off Swap, I just assumed I'd be sending my partner some sort of tasty treat, either homemade or a purchased extra.  Then I got partnered with the amazing PerfectlyBohemian, who is on a keto diet right now.  So I decided to try to make her all those carb-filled baked goods, in other ways... 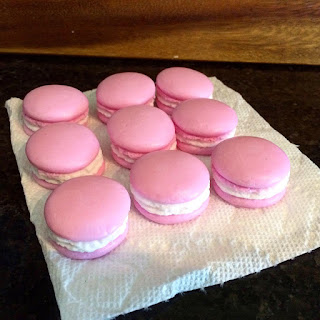 The result was a set of spa goodies.  French Macaron Soaps were the first decision.  I purchased a silicone mold from Amazon.  It makes 6 soaps per batch.  (If I was going to do more of them, I'd consider getting a second mold to do more at a time.) I picked up some melt & pour goat's milk soap from Joann's.  Most of the scents were in my stash already. 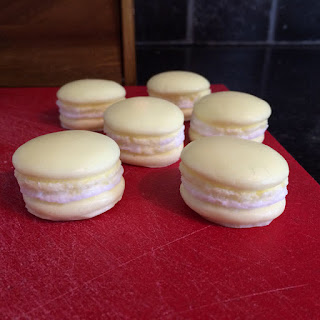 I ended up making 4 different scents, Lychee Red Tea (pink), Lemon Chiffon (yellow), Butter Mint (green), and Vanilla Latte (tan w/brown flecks).  I tinted the pink, yellow and green with soap colorant, and the tan was achieved by adding a bit of cocoa powder.  The flecks are coffee grounds, which not only resemble vanilla bean flecks, but also work as an exfoliant.  :) 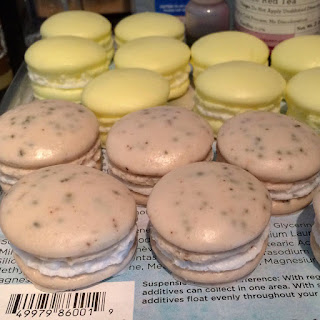 Out of a 2lb block of soap I think I got about 39 macarons, and one larger lump of leftover soap that had been already tinted and scented.  (I forgot to put aside 1/4 for 'filling', and had too much 'cookie'.  :D)  I packed them up in little treat boxes, with mini-cupcake papers, both also found at Joann's, and tied the boxes with baker's twine. 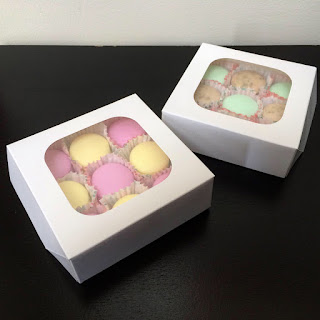 I decided to make a vanilla sugar scrub to go with them, because I ran into the cutest little jar that says 'home made'.  It was too cute not to buy.  Since my partner listed loving the scent and flavor of vanilla, I used my homemade vanilla extract as the scent, and voila.  Vanilla Sugar Scrub! 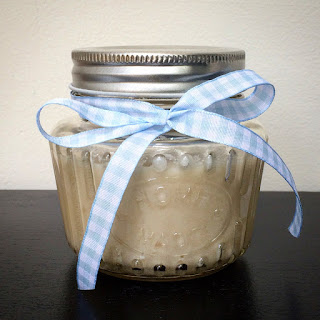 Posted by Jennie at 4:39 PM No comments:

I made this little ornament for Audania1 in the HP Holiday Ornament & Stocking Stuffer Swap.  The very last HP Swap to be hosted here on Craftster!   :'(  But don't worry, I'm sure I'll host a lovely new HP Swap in our new home, as soon as we have one to settle into.  ;) 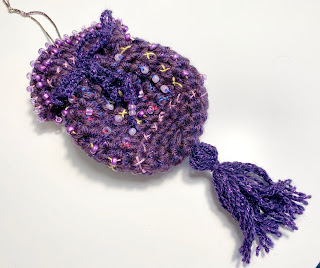 I knew when I started the swap that I wanted to come up with an object or scene from the books that I hadn't seen done as an ornament before.  It took me a few days of pondering, but I suddenly remembered Hermione's bag of holding pretty little beaded handbag that also served as a mobile library while hunting Horcruxes and on the run from Death Eaters.  It is crocheted from 2 yarns held together, Caron Simply Soft in plum, and Lion Brand BonBons in purple sparkle.  I didn't use a pattern, just winged it based on the many other bags I've done in the past.  I believe I started with 6 sc, and expanded up to 24 in your average crochet circle, then the sides were done in hdc, because sc was proving too stiff for the shape of the bag I wanted.  I just hooked until I liked the height to the point of a drawstring, then did a row of hdc, ch 1, sk 1 st, all the way around, then finished with a round of hdc and a final row of sc.  I crocheted the drawstring and made the tassel out of the BonBons sparkle, then I dug through my embroidery thread stash, and bead stash, to find stuff to embellish the little bag with. 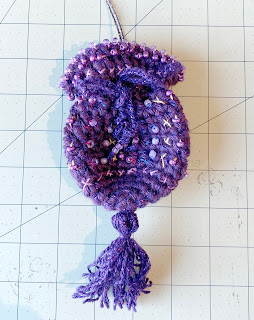 I hid a second ornament inside: Slytherin's Locket! 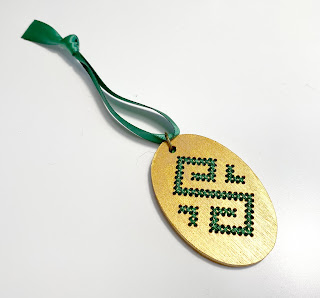 Posted by Jennie at 3:11 PM No comments: