This is a buddy-created project, by the absolutely amazing Shannon Cooper at Flew the Coop & I.  Recently I've been working on shawls for a few friends who are going through rough times, and was getting a bit behind trying to finish them in a timely manner.  So Shannon offered an awesome solution; she had started this shawl, and offered to send it to me, along with a second skein of the yarn, so I could finish it.  I ended up adding 13 rows of the written pattern, then a row of single crochet all the way around, to give it a more finished looking edge. 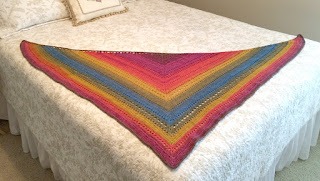 The pattern is the Mystic Morning Wrap, and is free!  The yarn is Lion Brand Mandala in Chimera.  It's made its way to a new home, and is bringing some cheer to its recipient.  :D 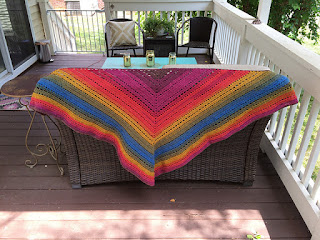 Shannon, thank you so much for your thoughtfulness and generosity!  It is truly appreciated.

Set of Chunky Mandalas for our Bedroom 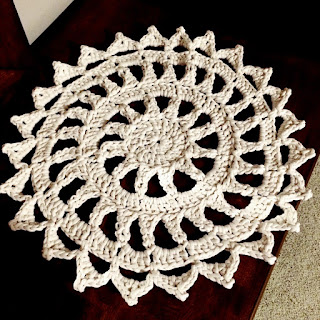 Monday I was feeling the need to make a quick and easy project.  I grabbed some Bernat Maker Home Dec yarn from my stash to make a few mandalas/doilies for our bedroom.  The yarn is a chunky knitted hollow tube of material, somewhat like tee shirt yarn, but more even and without seams in the way.  It's incredibly soft, and I am definitely going to make some more projects with it.  I like how the chunky yarn keeps them feeling fresh and modern, rather than fussy & old lady. 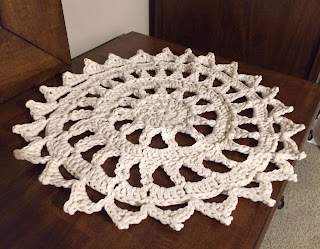 The large mandala is made from the Bloom Mandala Centerpiece pattern.  I did the first 6 rounds as written, and since it was getting pretty big, I did an amended version of the 2 border rows.  (If you want to do what I did, then for the first round of border, sc between each group of 5 dc, then 6 ch. For the second border row, sl st, sc, hdc, dc, picot, dc, hdc, sc, sl st in each ch 6 space around.) 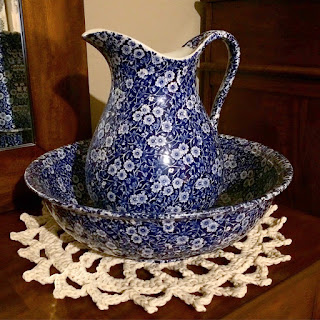 This one took my just one evening, watching tv after dinner.  It's amazing how fast this yarn hooks up!  It's about 16" across and a bit over 1/4" thick.  Hhere it is on the chest of drawers in our room.  It fits just right under the antique pitcher & bowl my parents gave us. 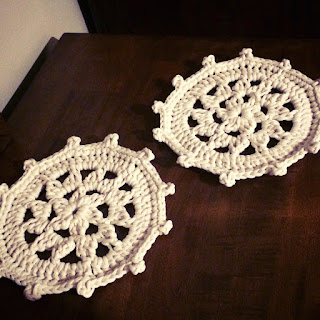 The smaller pair was made from the medium size pattern in the Aunt Aggie's Trivets pattern.  I did the first three rounds as written, then as it was getting close to the finished size I wanted, I improvised a new round 4.   (sc, picot, sc in the dc's in the points, sc in next 4, repeat) 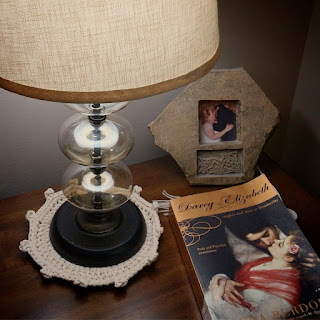 These are about 7" each, and took just a few hours yesterday morning.  I made them to go under the lamps on our night stands, and like how they soften up the look of the room. 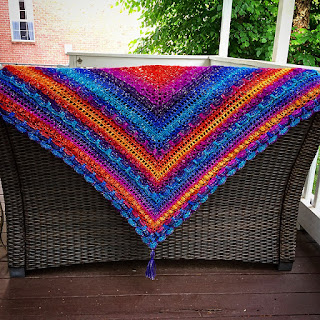 This shawl was made for a friend-of-a-friend that I haven't met.  She is also a ginger artist named Jenny (a musician), and she means a lot to my dear friend David.  David is absolutely one of the best human beings I've ever had the privilege to know.  He's the person who is there, no matter the time, no matter the place, just because you called him.  When he told me about what happened to Jenny, I knew I had to help in some way. 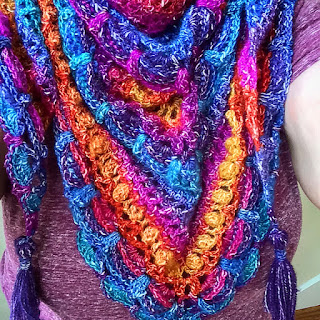 Backstory:  Just before Christmas in December 2016, Jenny was driving home a friend who had a bit too much to drink that night when she, herself, was hit head on by a drunk driver.  The impact was so severe that it ripped the front wheel off the driver's vehicle, throwing it into Jenny's windshield and crushed her left leg in the door causing her immediate and severe physical trauma.  She sustained multiple lifelong injuries, including hernias in her spine, injuries to her brain, a damaged sciatic nerve, and more.  She's also the single mother of an 8 year old daughter, and unfortunately due to New York state law regarding auto accident insurance, Jenny has ran out of medical coverage.   Though she has a dedicated team of doctors and specialists, who have helped her make several breakthroughs in her healing, she still needs daily & monthly trips to neurologists, physical therapists, chiropractors, message therapists, pain management specialists, etc.  Her recent lack of coverage has caused several major setbacks; the lack of physical therapy and massage has caused her to, once again, lose the feeling in her left leg. 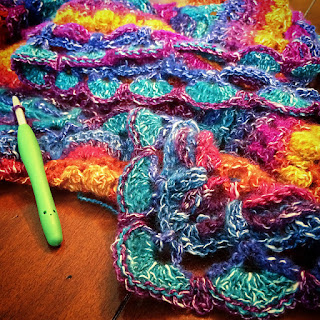 Her savings account has been depleted since the accident and she has been forced to sell most of her musical instruments and performance gear to stay afloat and remain stable for her daughter.  To make matters worse, she was informed by her doctors that due to the several brain injuries she sustained as well as the damage to her vision she will be unable to return to the marketing career she spent 13 years of her life in.  When all of this happened, Jenny didn't tell friends how badly she was hurt, as she didn't want to be a burden, but thankfully she finally let friends like David know.  David has started a Go Fund Me page for her. 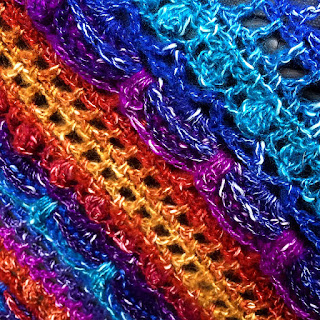 My husband and I donated, but I knew I had to do something else for her, to let her know that people are thinking of her and rooting for her, even if they haven't met her.  So I started on a comfort shawl for her, hoping it could be a warm hug when she needs one.  The pattern is called Lost in Time, by Johanna Lindahl, and is free on her website.  I used 2 skeins of Lion Brand Shawl in a Ball in the colorway Restful Rainbow.  This was my first time making and adding tassels to a shawl, and I am really happy with them.  I love how the whole shawl came out, but if you're going to try the pattern, know that it's a bit wonky to read as it was translated from Swedish.  Last night David sent me a few pics of Jenny wrapped up in it.  Apparently she's kept it with her while dealing with doctors offices and insurance companies, so I'm glad to know it's brought some measure of comfort. 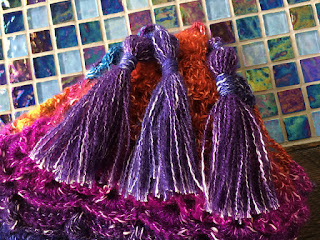 Posted by Jennie at 9:32 AM No comments: 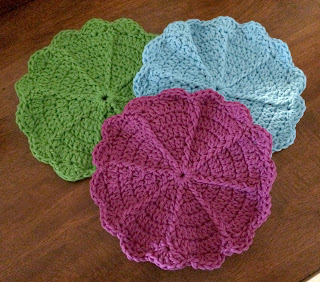 Just a quick post today.  After finishing my dishtowels, I had partial skeins of each color left over;  just enough to make a few dishcloths.  These were each made with the Fire Blossom Dishcloth pattern.  I have to say, while I found the yarn a pain to hook with, it's a dream to wash dishes with.  Thick and soft and awesome at cleaning pots and pans.
Posted by Jennie at 9:25 AM No comments: