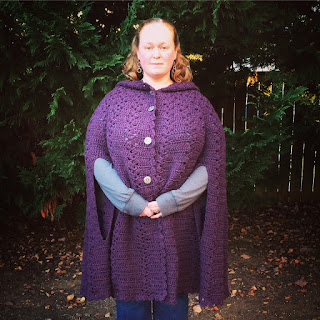 Finished!  I really love how my new cape came out.  I was worried about the length, because I'm very short, but it's perfect; warm but not cumbersome, coming to just below my knees.  If I were to do it again, I might find a way to have the arm slits start and end 2-3 rows earlier, because they do start just barely below my elbow, rather than at the elbow.  I was also concerned about the fit around the hips because the pattern is one size fits most and I'm a plus sized woman, but it is great.  Plenty of room without clinging, but not a giant tent of a garment either. 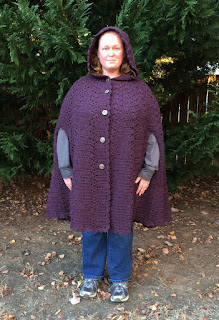 Some folks on Ravelry had expressed concern that the hood wouldn't be big or deep enough as directed, and mentioned various ways of making it larger.  The simplest of which was to go up a size or two in crochet hook.  Since I knew I was going to be close on how much yarn I had left, I decided to make it exactly as directed, and if it was too small, I could always go back and rehook it later without too much fuss.  I'm glad I did.  Once the edging was added the hood was a perfect depth, and I finished the project with about 1/2 of one skein of yarn left, out of the 20 balls I'd ordered.  I really liked the wool yarn, and would recommend it to anyone.  Warm and comforting in weight, without being overly heavy.

It took exactly 1 month to finish the cape, due to the fact I did a lot of extra crocheting to hook out my feelings over the tensions of this election season.  Now that I've finished it, I'm still geared up, so it's time for a new project.  A silk shawl to be precise.  I bought the pattern and yarn when I was laid up back in March, but they didn't ship my order for well over a week, so by the time I got it, I was all better, and onto other projects.  The pattern is the Silk Waves Shawl from Darn Good Yarn, made from their lace weight recycled silk yarn, in the color Enchanted Forest.  It's been a strange switch from the worsted wool and 6.5 hook, to the fingering silk and 3.25 hook.  It was like learning to crochet all over again yesterday as I worked on my test swatch. Since the swatch came out well, I have moved onto the actual shawl, and completed 2 rows yesterday afternoon.
Posted by Jennie at 8:25 AM No comments:

I somehow frequently forget to post about my crochet projects here.  In the last few years I've started to crochet more often, usually at night while watching tv with my husband.  I just can't seem to stand my hands being idle.  First I started making extra dishcloths, and then I decided to use up some yarn I had been given by making an afghan.  That led to making another afghan for a wedding and one as a Christmas gift.  This summer I made a slew of hats and scarves to donate to Syrian refugees (I'll have to do a post on those soon), and finally finished the sweater I've been working on for 22 months!

I finished the Hip Granny Tunic a few weeks ago, but it hasn't actually been cold enough to wear it yet.  I did shorten the sleeves by several rows, and oddly enough I had to add several extra rounds to the bottom to make it long enough.  I also added a few rows of single crochet to give the edges a more finished look.  Not bad for my first ever crocheted garment!

Meanwhile, for my birthday I received an unexpected present.  A gift card to Knit Picks, from my dear friend Melissa who is quite the crochet goddess.  I knew she would want me to use the gift on something for myself, so I did.  I combed through my favorites on Ravelry and items I had pinned to my crochet board on Pinterest, and finally decided on the Long Hooded Cape pattern from Maggie's Crochet.  I'm using Wool of the Andes Worsted yarn, in the color Claret Heather.  So here I am working on my second crocheted garment!  I've gotten through the first 42 rows, and it's now getting pretty big.  Here it is on my dining room table.  The holes you see on the sides are arm slits.  Now I have 17 more rows of length, before I add the hood and edging. 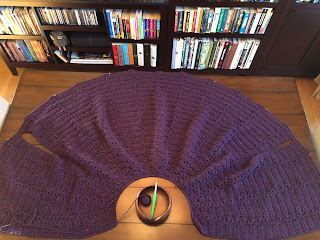