Where Would You Go?

Working on my Egyptian Adventure Charm Bracelet got me thinking about the other places I'd like to eventually travel.  So far I've created travel bracelets based on several places I've been, including London, Paris, and New York, but there are so many others I'd like to see.  And of those possible future trips, one stands out.  New Orleans during Mardi Gras. 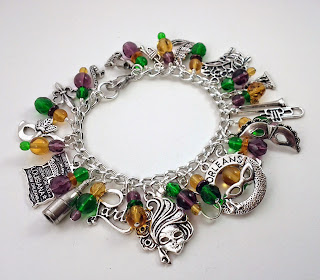 While I wouldn't turn down a visit to New Orleans any time of year, the costume designer in me just can't resist the idea of all those amazing costumes covered in rhinestones, feathers, and elaborate headdresses.  Bedecked in that much fabulous, who wouldn't want to party? 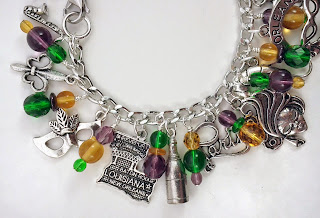 I dug through my stash to come up with charms that represented the spirit of "laissez le bon temps rouler".  Music, masks, and mirth.  I found saxophones, trombones and trumpets to represent the city's jazz traditions; a multitude of masks; shrimp and champagne for the city's cuisine and celebratory nature; and fleur de lis for their French heritage. 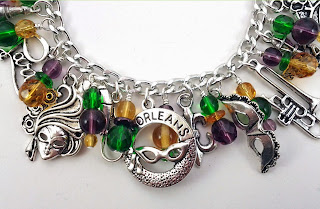 The beads were an easy choice; the traditional colors of the Mardi Gras are purple for justice, gold for power and green for faith. 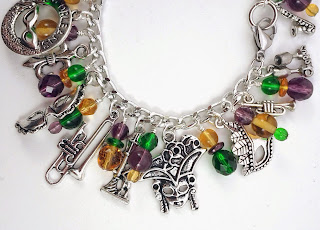 All in all, it's a lively bracelet and I hope I've done New Orleans and Mardi Gras justice.  Now to begin conjuring up my next dream trip.  Munich during Oktoberfest?  Venice for Carnival?  New Year's in Sydney Harbor?  La Tomatina in Spain?  While I'm sure I'd love throwing the tomatoes, I'm not sure I'd like to be washing them out of my clothes later...  What about you?  Where would you go? 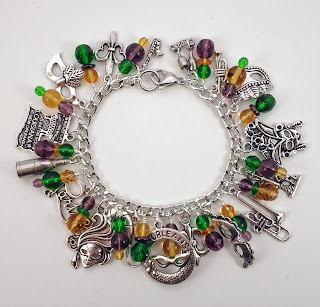 Posted by Jennie at 2:54 PM No comments:

I Could Use a Little More Tea Time

I'm not sure what it's like where you are, but here it is raining.  A lot.  And while I do love being home on a rainy day, a few things have gotten old about this weather.  First of all the past several days of rain has meant that my dog refuses to go outside, and is spending most of her time hiding under my desk while I craft, rather than on the arm chair in my studio where she usually perches.

Second, it means that even with an overhead light, huge window, and desk lamp, my studio still feels dark.  So dark that I keep yawning and considering that Astrid might have the right idea by napping the day away.  But since I never have been able to nap (I just lay awake thinking about all the things I could be doing), I make another cup of tea and keep crafting.  This has led to the plan of making some new tea infusers for my shop.  But just what new themes should I put try next has got me stumped.  These are a few of my favorites, which all just happen to be fandom-inspired.


What themes or charms would you like to see happen?  And what is your favorite way to spend a rainy day?
Posted by Jennie at 4:07 PM No comments:

The Magnificent Hedwig; Deliverer of Mail & Guardian of Scissors

I take inspiration from wherever I can get it, but my favorite place is from my friends and fellow crafters, especially those who play with me over in the Harry Potter Craftalong.  The very talented AugustBell always seems to have something fun to share, and kind encouragement for the folks in the craftalong.  When she asked me to create a special Harry Potter scissor fob just for her, it got the Muses singing. But just what are scissor fobs you ask? 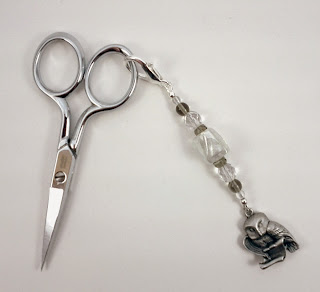 Scissor fobs serve a few functions.  First and foremost they clip to the handle of your scissors to help you keep track of the only craft tool on the planet that seems to actively try to run away when you're not looking.  They allow you to distinguish your scissors from everyone else's at events like quilt guild meetings, and clearly mark them as yours so no one else will try to grab them by mistake.  Lastly, they are just darn pretty.  Like bling for your craft supplies. And if you're not a crafter the fobs can also be clipped to zipper pulls, key rings, or add a little extra sparkle to your day as purse jewelry. 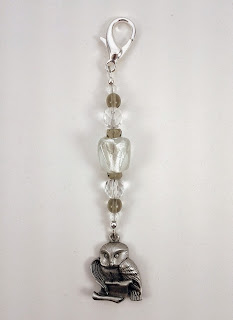 For this fob I dug through my stash looking for something unique for AugustBell.  I found some awesome Hedwig charms that I bought a while back, but haven't had a chance to use yet. They are so beautifully detailed, from the feathers on the wings to the curling scroll in her talons. I wanted to keep the colors close to the Hedwig of the book and film, rather than let it be just any old owl delivering a message, so I used crystal clear and smoke grey Czech glass beads, and a beautiful shimmering clear & white glass bead that I found buried in my stash.  I wish I could have captured the gentle shimmer of the focal bead, as it really is even prettier in person. 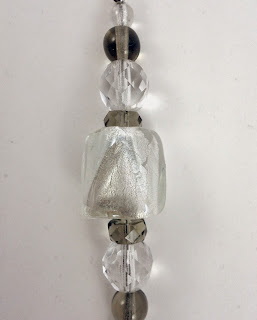 Now that she's been sent to her new home, hopefully she'll keep a good watch over August's scissors so they aren't stolen by mischievous pixies or doddering House Elves. 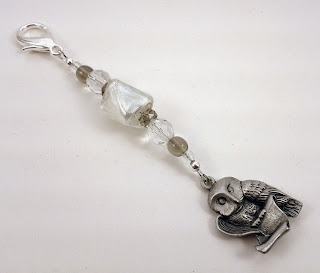 Hedwig Scissor Fobs in my Etsy

Where Do I Go From Here?

So often blogs are started with a nobel new project, or an exciting adventure on the horizon.  Readers are asked to begin a long trek with their writers, and bear witness to the ups and downs of the expedition.  This is not one of those times.  The truth is that I've been making and crafting and creating for so long, that I don't remember where the journey started from.  There is no map on this trip, and certainly no destination planned.  So instead of inviting you to begin a new quest with me, I bid you to join this odyssey somewhere in the middle, and together we'll see where it takes us.

Much of my crafting involves the jewelry, bookmarks, and other beaded baubles that I create for my Etsy shop, Mistress Jennie's , but I will also be posting about my other crafting endeavors like crochet, paper crafting, quilting, and cooking projects as the inspiration arises.  As I also run the Harry Potter Crafalong and frequent HP themed swaps on Craftster, so don't be surprised if you see some of these projects pop up here.

And now, let us continue my crafty expedition... 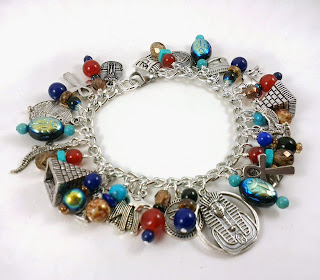 Last month my fantastically talented friend Shannon at flew the coop created a beautiful Heart of Darkness Trunk for Alpha Stamps.  She and I had a fun discussion about the romance of travel to exotic locales in the late 19th  & early 20th centuries.  While her project took her to darkest Africa, I longed for the glamour of Egypt in the teens and 20's.  With Howard Carter's uncovering Tutankamen's tomb in 1922, came a craze for all things Egyptian in home decor, fashion, beauty, and Hollywood, which produced pictures like The Mummy. 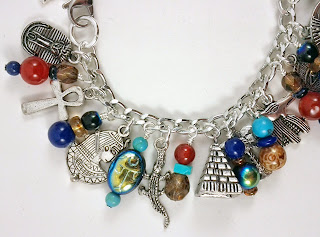 When I create a new bracelet design, I usually start with the charms, but this time I created the bead pins first.  I went with the colors and stones found most often in Egyptian jewelry; shimmering golds, bright turquoise, rich carnelian and beautiful lapis lazuli.  When I found the gorgeous iridescent Czech glass scarab beetles, I knew I had to include them too. 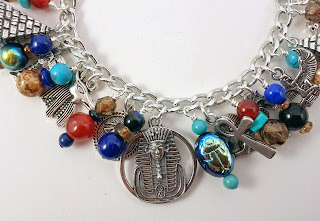 The result is an eclectic mix of semi-precious stones and glass beads.  After I had these assembled I moved on to the charms.  I wanted to capture that early 'Tutmania' feel, and so included Tut himself, ankhs, Cleopatra, a croc from the Nile, pyramids, palm tree, Horus, a few Pharaohs, sphinx, Isis, a camel, the Eye of Horus and Nefertiti. 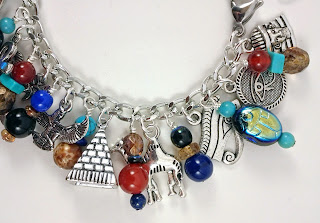 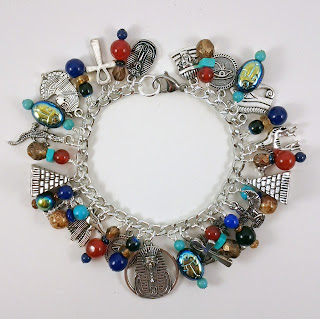 So friends, where should we go next?
Egyptian Adventure Charm Bracelet in my Etsy Shop