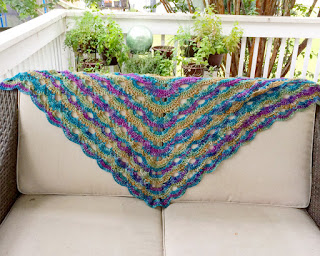 I know I'm late to the party, but I finally got around to giving the virus shawl pattern a try.  I have always been afraid of working off a crochet chart rather than a written pattern, so  I started by printing off the chart, then pulling up a video on how to crochet it on Youtube. I used the video to help me learn to read the chart, and by the time the video was done, I was able to work solely off the chart with the repeating pattern.  It was a huge help, and I feel much more confident about trying to work solely from a chart in future. 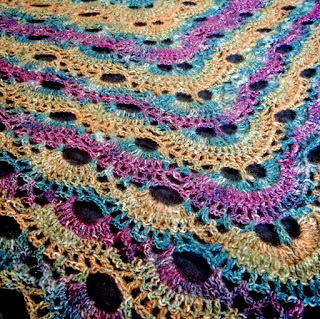 The shawl was made with 1.5-1.7 skeins of Lion Brand Shawl in a Ball yarn, in the colorway Prism.  It is labeled as a worsted weight yarn, but I found it very thin for worsted.  I used a 4.5mm hook.  It is hard to see in the pictures, but it has an electric blue metallic strand running through it. I bought the yarn months ago, specifically for this project, but had put it aside to finish some other projects that came up, including a pussyhat and a baby blanket, both made with Caron Simply Soft Party, which also has a metallic strand.  In working on those I became very frustrated, because the metallic strand frequently broke, and was finicky to work with.  When I finally got around to this shawl, I was afraid the metallic strand would behave the same way, but I was pleasantly surprised!  It behaved much better, and I had no breaks in it at all, over the course of the entire project.  I would highly recommend the yarn.

I think I might make another one, since this one was so much fun.  For reference, this last photo isn't distorted.  The shawl is laid across my king size bed, so you can see just how long it is.  I made it to cuddle up in while working in my studio, which can get cold, so I wanted it plenty big.  While the yarn is thin and the overall effect is lacy, it does provide some nice warmth, and can be bundled up and worn as a triangle scarf.  I wore it to the theatre with a thin sweater on a cold day, and it really helped keep me warm, while also looking dressy enough for the event. 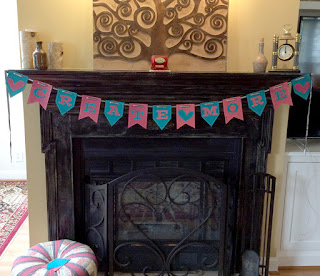 This was made for kittykill in a recent personal swap on Craftster.  Like my All Hallows Eve Banner, it was made solely from card stock, ribbon, markers & inks in my stash.  I was so excited to see that red and turquoise were some of her favorite colors, because it's one of my favorite combos. 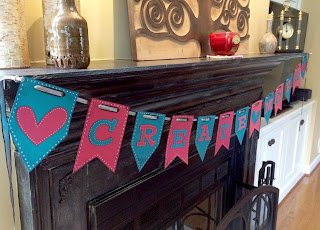 I cut out the pennants and letters with my Silhouette Cameo, the distressed them each with Tim Holtz distress ink pads, before using glue dots to attach the letters.  I strung them all onto a long ribbon, and left them loose, so that kittykill could adjust them closer together or further apart as needed when hanging it.  I also included a few extra pennants, in case she ever wants to add to it. 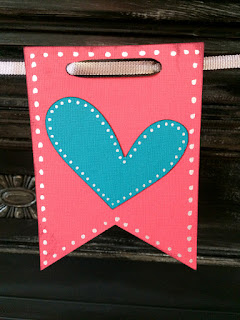 Some of the Mods on Craftster recently decided we needed some sort of happy swap amongst ourselves.  We all decided to fill a small Flat-Rate box, and I was doing well adding bits and bobs, but I had a bit of dead space, so I decided to whip up a dishcloth to fill some space and cushion some things.  I got the fun of crafting for kittykill.
She mentioned having a cheerful yellow & red kitchen, so I made a cheerful sunshine dishcloth.    Then, since I had some white cotton, so I made a cloud to go with it.  Seemed like a great idea for a happy little matched set.
All this happened around the time there was so much excitement about the solar eclipse, so I whipped up a solar eclipse cloth to match.  For the Eclipse, I started with the Sunshine pattern above, and added the edging from this Eclipse Coaster pattern, made from I Love This Cotton! in black, and Sugar'n Cream yellow and bright orange. 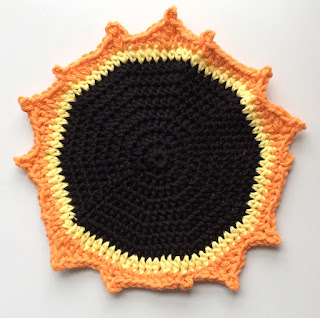 At this point, it should have been clear I had a problem...   But since I couldn't seem to stop hooking, I finally decided that kittykill clearly needed a whole set of celestial dishcloths, and added in a star and a rainbow.  Well, the best I could come up with for a rainbow, since I crocheted them all from stash.
I skipped the edging on this one, as I liked the clean look of the star without it.  It was made from I Love This Cotton! in colorways Turquoise, Pewter, Aqua Ombre, and Teal.  My final 'rainbow' cloth was made with I Love This Cotton! in color 'brights', and the pattern is called Fire Blossom.  I have a set made for me by a friend several years ago in this pattern, and these are by far my favorite dishcloths.  They are just the right size, and just the right density for washing dishes.

Posted by Jennie at 8:30 AM No comments: 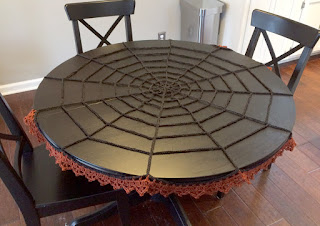 I recently participated in the Vintage Halloween Swap on Craftster, and had the fabulous good fortune to be partnered up with my friend FiberAlchemist.  The first thing I decided on making was  a Spider Web Table Topper, that I saw the pattern for on Red Heart's website.  It calls for 1 skein of their Super Saver, but since I hate how scratchy that stuff feels, I made mine with most of a skein of Premier Yarns Everyday Soft Worsted Heather in charcoal for the web, and half a skein of Lion Brand Heartland in Yosemite for the lacy edging, both dug out of my stash. 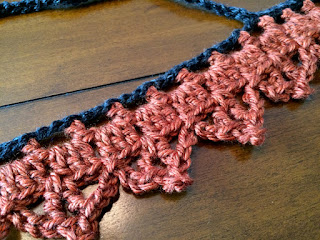 While I was making it, I discovered a flaw in the pattern.  Sadly I was on the last row of webbing at the time!  I went back and rewrote the pattern, made myself a crazy color coded chart, and even a matching set of rainbow stitch markers to match the chart, and re-crocheted the whole thing.  Glad I did though, since it came out so much nicer after I fixed the pattern.  Since the yarn came from stash, the only cost was my time in frogging and rewriting the pattern.

Since I was trying to craft from stash as much as possible, I decided to look around and see what I could make with my Silhouette.  I found some black and orange card stock, and some silver ribbon with black edging that I knew FiberA would like.  I bought the cameo cut files from the Silhouette store, which was the only cost. 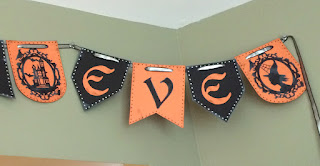 After cutting all the bits and pieces, I distressed everything with some Tim Holtz distress ink pads, distress paint pads, and markers, before putting it all together with glue dots.  Not bad for a $4 project! 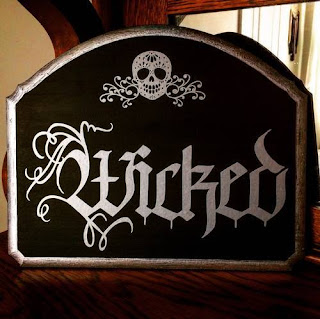 My final project for FiberA was a sign I saw a tutorial for on the Silhouette blog, which called for cutting the words out and using the 'dead space' as a stencil instead of using the words themselves.  Then using a paint pen to 'scribble' in the letters, and removing the vinyl to leave the scribbles behind.  I started off by following the tutorial, but sadly, that just did NOT work.  The paint pen bled under the vinyl stencil so much that the words were completely illegible!  So I sanded the paint off, and started over.  I used the Silhouette for what it was intended, by cutting the words out of silver vinyl, and applying them like normal.  But there was a bit of dead space at the top, so I added a scrolly skull to fill it in.  I like how it kinda feels like a tombstone with the curved top.  The wooden sign came from Michael's, and was priced as $10.99, but I had a 50% off coupon, so it was $5.49, plus $2 for the cut files from Silhouette.  That made a grand total of $11.49 for 3 awesome projects.

Posted by Jennie at 4:58 PM No comments: 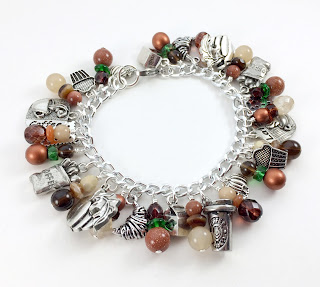 Love it or hate it, you know your Facebook & Instagram feeds were full of them today....  The Pumpkin Spice Latte has returned, and heralded the season of PUMPKIN SPICE EVERYTHING!  So to celebrate, I created a Pumpkin Spice charm bracelet.  Goes great with yoga pant and Uggs....  Or you know, real clothes. 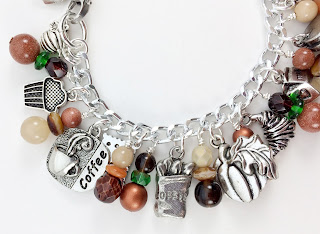 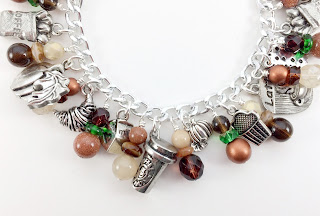 The beads are a mix of Czech glass, Swarovski crystal pearls, and stone, in shades of pumpkin, copper, rich coffee brown, cafe au lait, and a touch of deep green, in a nod to the iconic coffee house's green straws. 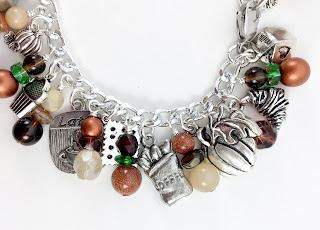 After staring at this all day, now I'm wondering if I have the makings of pumpkin spice muffins in my cupboard..... 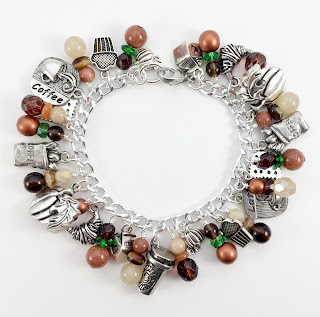