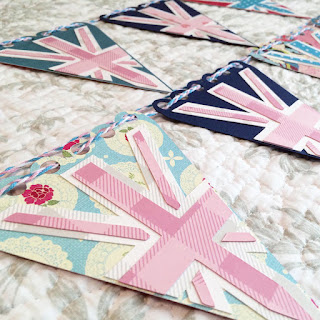 As soon as I signed up for the Great British Bake Off Swap, I knew that I wanted to make a bunting.  But instead of fabric, I decided to use some sweet blue & pink floral papers I won from an Alpha Stamps giveaway a few years ago.  (Sorry, can't remember the name of the line.)  I used those pieces as the base, and found a few more bits in my stash, and bought a few more sheets of cream, pink, and turquoise, to round out the project.  I was especially happy to find cream-on-cream and pink-on-pink gingham!

I cut the project on my Silhouette Cameo, starting with the bases, from a file available in their online store.  Only problem: I zoned out when cutting, and didn't pay close enough attention.  I assumed that the larger of the crosses should be cut from white, since white runs around the outside of all the red on the flag of Great Britain.  So I cut them all, then glued them down while what I thought should be pink was being cut. 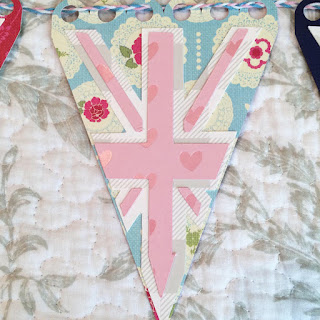 Nope!  Turns out the cut file was strange, and wanted there to be a giant red cross, with thin fiddly little bits of white cut out and placed over the red.  They were a pain in the bum to cut, and did NOT want to come off the mat cleanly.  I destroyed 2 or 3 sheets of paper, as they tore to shreds when I tried to take them off.  Only to realize an hour later, that they would have been the wrong color in the wrong place anyways! 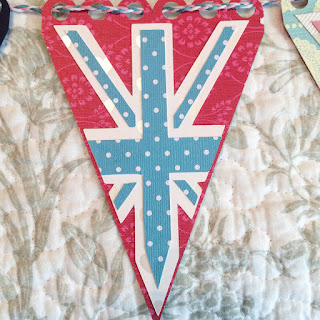 Finally I decided to just change the cut file itself! I used the line tool and the eraser tool, to create a new center 'red' piece, which could be glued over my already-glued-down white bits, thereby saving the pretty background papers.  All in all, after mucking things up a few time, I managed 17 pennants, out of the 21 bases I had cut.  17 seems like plenty anyways, right?  ;) 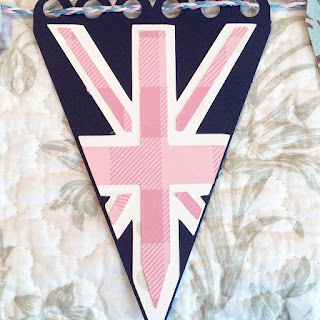 When I went to string them, I couldn't find any ribbon in my stash that I felt matched well enough, so I grabbed 3 colors of embroidery floss, and made a GIANT braid to string them onto.  I think it was somewhere over 4 yards?  That way if the entire piece was too big to display anywhere, PerfectlyBohemian could cut it in half, and then have two pieces of bunting, with plenty of string for each end. 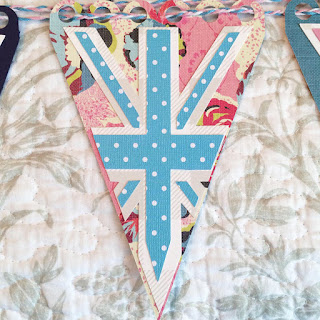 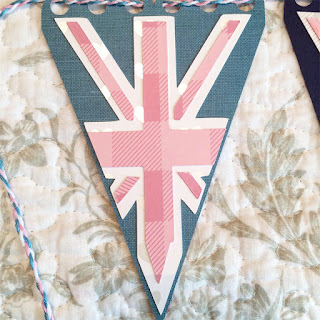 And here it is strung across PB's plant stand: 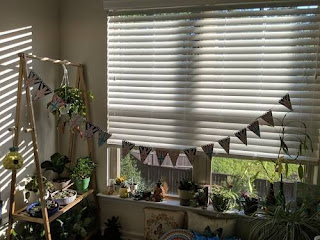 Posted by Jennie at 4:40 PM No comments: