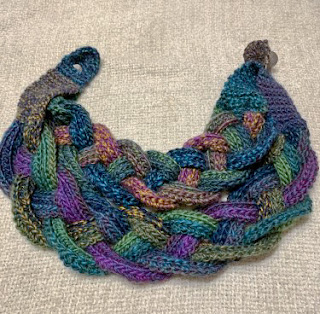 This cowl was made for LeapFeetFirst in the Asheville Adventure Swap.  The pattern is the Double Layer Braided Cowl, and is available for free. The yarn is Nako Artist in colorway purple-green multi.  I picked it up on sale from Webs a while back, and had been waiting for the perfect project to use it for. 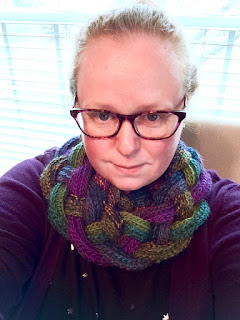 Posted by Jennie at 3:42 PM No comments:

This bowl was whipped up as an extra for LeapFeetFirst in the Asheville Adventure Swap.  It's made of sari silk ribbon yarn, that is made from worn out saris that would otherwise end up in landfills.  They are rescued, sliced, stitched, and dyed, and given new life as yarn.  Both colors came from Darn Good Yarn.  I'm not sure what the purple one is, since I bought it as part of a sample sale, and it didn't have any info with it, but the turquoise is their 'Indian Brushstrokes'.  The pattern was also from DGY, and came free in one of their yarn-of-the-month boxes.  It can be found in both knit and crochet HERE. 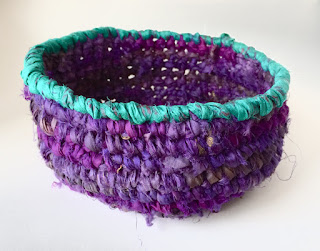 Posted by Jennie at 3:39 PM No comments:

Last year, in the summer term of the Harry Potter Craftalong, I offered to make a suncatcher for those who completed their 'extra credit' in Herbology, aka did some word searches and crosswords I made up.  Patty_o_furnitre and Audania1 took me up on it, but somehow the whole thing slipped my mind for AGES. Once I remembered, I asked them each what kinds of colors they would enjoy, and made up one for each of them.  Patty_o's is going in her craft room, which is mermaid themed. 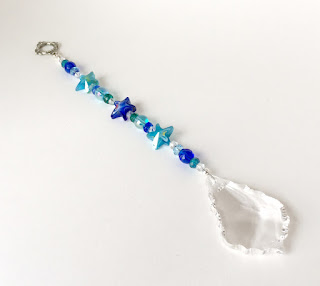 Audania1's is going in her kitchen, which is entirely white, and full of plants.  The prism on this one is actually a giant Swarovski crystal pendant, that I have been hanging onto for ages, waiting for just the right project. 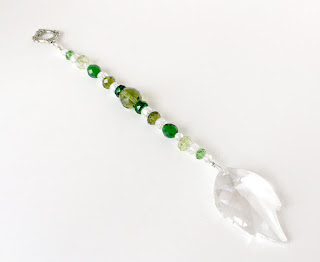 Posted by Jennie at 9:30 AM No comments: 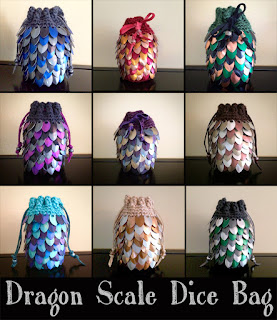 I have a confession....  I never seem to craft for my husband.  I craft for so many friends and family members, but I rarely make things for him.  This is partly because he doesn't care much for gifts or clutter, and because if there's something he wants in the world, he buys it for himself, leaving me little to do.  Over the course of our 15 years together, I've managed to make him 1 quilt, 1 laptop sleeve, and 1 cozy for his French press coffee maker.  But when I saw this pattern a while back, I knew I'd have to make one for him.  It's been sitting on the back burner for ages, but now that he's gearing up to go to Gary Con in March, the time was right to bust out my scales, and get to work.

So I stitched up a bag in some of his favorite colors.  Blue, black and grey.  All the items were in my stash, including leftover yarn, scales from The Ring Lord, leather lacing, and glass crow beads.  Gift completed, easy peasy.
Only problem?  I had so many more scales left.  And tons more yarn.  And I felt like the pattern could use a bit of tweaking.  So I clearly had to make a second one to tweak the pattern.
The second bag came out well, but the pattern could still use more work, so I tried a third with a few more alterations.
By now I had settled on how I wanted to alter the pattern.  So it only made sense to make another, with the new, improved shape.  But I was finally running low on scales.  Or at least colors that went well with one another.  So I ordered a few more colors.  The result was possibly my personal favorite.  It's not like I have a collection of dice to carry around, since I don't play D&D, but if I did, this one would be all mine.

I loved the deep purple titanium scales, and found they went well with the warm sand and deep steel blue, so another bag happened.

When I was putting away the yarns I had used thusfar, I bumped into a partial skein of deep brown Heartland, and realized it would go beautifully with the dark brown scales that had been in my stash, so why not make one more.
After that some of the other titanium scales were calling to me, with their siren song.  "Jennie, come play with us!  We look like mermaid scales!"  This probably ties for my favorite.
And I had so many of the gold and champagne scales, it only made sense to create something lighter and brighter.
And finally, as I was wrapping up the last of my yarn balls, I had a bit of the charcoal left over, and the green scales were just demanding that I create a Slytherin theme, inspired by my dear friend Zoe, who plays D&D, and somehow, despite being just about the sweetest person on Earth, thinks she's a Slytherin.
After finishing my ninth bag, I went back and actually remade my first two.  After all, what's the point of improving the pattern, then giving my DH a less than perfect version?  In this picture you can see a comparison of the two versions.  The original is on the left, and my version on the right.  The alterations created a better overall egg shape, and kept the bottom row of scales from twisting out of place as it sits on a table. 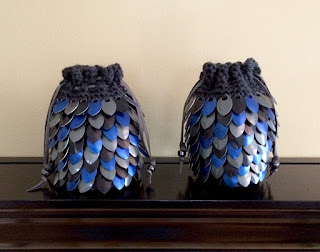 Posted by Jennie at 1:54 PM No comments: