Despite planning for it, I always seem to underestimate just how much time I need to spend crafting to fill my shop for the holidays.  Even though I had put aside time in my schedule for personal crafting and blogging, it all once again got commandeered for the cause.  And even after the holidays are over, I usually spend much of January trying to remake items that sold out over Christmas, with the result being that I don't get to work on much fun crafting between October and February. 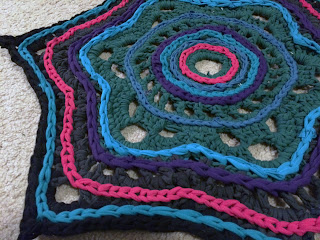 So this weekend, with winter storm Jonas terrorizing the East Coast, I decided to finish a project that had been previously put on hold.  The result is my new Scrappy Star Rug!  I began this one as practice for making my Scrappy Rag Rug for noodle-bug last June.  Unfortunately, with only 1 round left to go, I had to put it on hold in order to make noodle's rug.  The pattern is also from ATERGcrochet on Etsy, and is much smaller, with only 11 Rounds, rather than the 32 called for in the round rug pattern.  Finished, mine measures 30" across.  I decided to use only upcycled tee shirt yarn when making this one and learned quickly that I prefer the un-seamed yarn available commercially.  The seams always want to pop up where you least want them, and make feeding the yarn a bit of a pain. 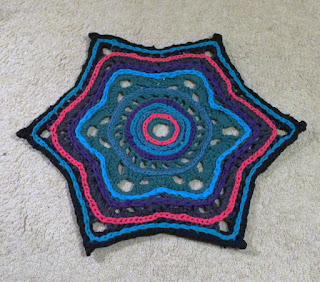 Yesterday morning I sat down and finished the last round, and was very proud of myself for completing a work in progress.  Then I looked down at what was supposed to be a happy little rug, and decided I was dissatisfied with it.  The body is mainly emerald green, with a round of charcoal and a round of black at the outside edge.  Overall, it was simply too dark, and frankly too boring.  So, while binge watching That 70's Show on Netflix all afternoon, I decided to add some of the looped rows called for in the round rug pattern, which had done so much to brighten up noodle's rug too. I dug through my stash and found a few balls of teal, turquoise, purple and red yarn that I made from some of my Old Navy tees that had become worn out.  Old Navy jersey makes for a very soft and stretchy yarn, which would not have worked well for the body of the rug, but is perfect for the rows of contrasting loops.  Now I can finally say that I'm not only finished with the project, but happy with it too.  And now it's off to a new home with a friend.  So long little rug!