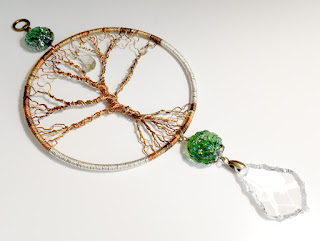 Recently I had the good fortune to be partnered with Wulf in the Use the Good Beads Swap.  My initial idea was to make him a Tree of Life art quilt, but after some discussion, Wulf revealed he didn't actually have any wall space for hanging one, but suggested that he did need a table mat for his dining room.  So I went off on that adventure.  But there was also a throwaway comment he made, about not wearing jewelry, which is one of my favorite crafts to make, and it stuck in the back of my head.  How could I, a jewelry maker, make him some sort of jewelry for his HOME, rather than for him personally? 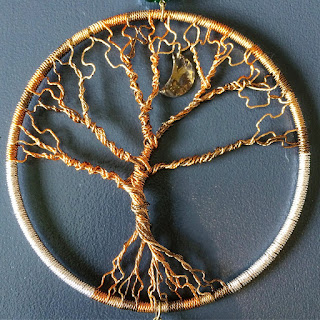 This started to ferment in my brain, spiced with a bit of the previous desire to make something with the tree of life, and resulted in the idea to make him a sun catcher for his dining room window.  The tree was created with artists jewelry wire in light gold, bronze, & copper, with silver wire used to fill the dead space between the branches and roots.  Hanging amid the branches is a Swarovski crystal crescent moon.  Above and below the tree are emerald green Czech glass rose beads, and at the bottom is a Asfour crystal pendant. 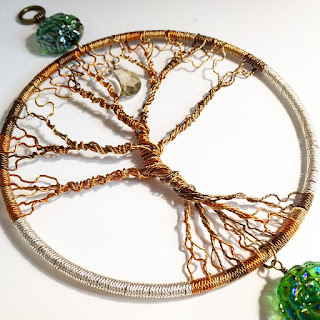 I thought this would be a quick last-minute addition to the swap package, but it actually took much longer than I planned.  The wire I used was made of two strands of wire twisted together, resulting in thicker wire, that was a bit harder on my fingertips as I twisted it around the metal ring, and twisted it into the truck and branches.  As for technique, I read several tutorials online, then mixed them all together to get the effect I wanted.  I forgot to measure the finished piece, but the tree is either 5" or 6", the green roses are about 1", and the prism pendant is just over 2" long. 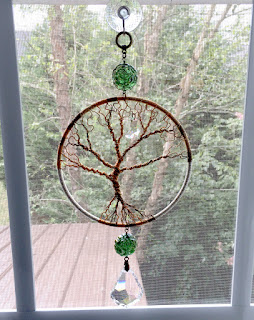