Are You a Good Witch or a Bad Witch?

I'm afraid I've gotten a bit behind on my blogging.  My only excuse is that I've been crafting so many extra Harry Potter and Outlander bracelets to put away for the holiday rush. But I have managed to get around to a few new designs.  This first one is probably my favorite new design in a while.  It was inspired by my partner edelC in the Back to Hogwarts Swap on Craftster.  Hers was the prototype, but this is version 2.0 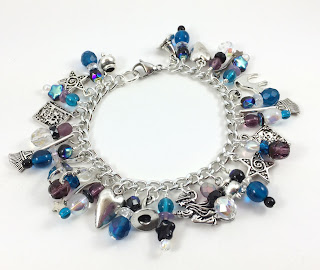 While witches and ghosts and ghouls in orange and black abound at Halloween, I wanted something a little sweeter, that could be worn all year long, so the beads are a mix of deep teal, purple velvet, jet black and crystal clear.  Most of the beads have an AB finish to lend the design some extra shimmer. 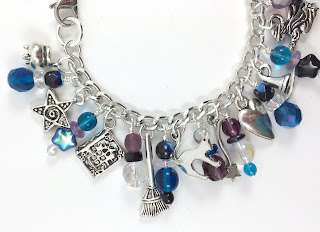 The charms include cauldrons, swirling stars, spell books, broomsticks, cats, magic wands, hearts, witch hats, and a fantastic witch on a broom from TierraCast charms.  I like how sleek and clean the lines of the charms are on this one, giving it a slightly modern feel. 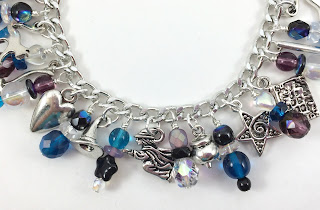 I have some new wine charms to share soon, full of autumn and Halloween goodness.  Meanwhile, I can't wait for Halloween itself.  This is the first time we'll be home during Trick or Treating for the last several years, and I'm really hoping we get a good turnout of kids coming our way. 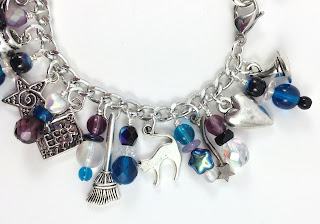 How about you guys?  Are you all ready for Halloween?  Any fantastic costumes in the making? 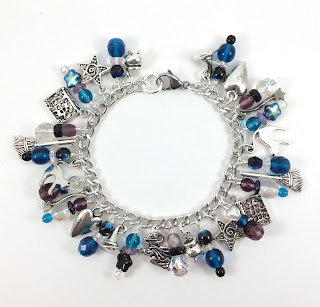