It's finally autumn here in the South, and for me that means spending a few days with my friend Amber, canning ALL THE THINGS for Christmas gifts.  In my last two posts I shared the vanilla extract and limoncello that we made.  Now it's time for the canned goods. 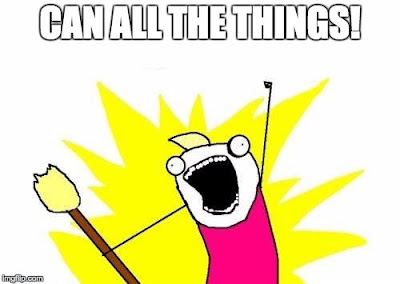 The first recipe we did was Banana's Foster Butter, which comes from a 1 off magazine from Better Homes & Gardens, called Canning, Preserving + Freezing + Drying.  It came out in 2014 and is out of print.  However, some digging around on Amazon turned up a new book that BH&G put out last year called Better Homes and Gardens Complete Canning Guide: Freezing, Preserving, Drying, which does contain the recipe. After making 3 batches of it, I did tinker with the recipe a bit, so I've included my version.

3. Process filled jars in boiling water canner for 10 mins, starting timing when the water returns to a boil.  Turn off heat and wait 5 mins.  Remove jars from canner, and cool on a towel.  Leave jars undisturbed, and away from any draughts for 24 hours.

4. After 24 hours check lids to make sure they've sealed.

While I normally pride myself on planning ahead for our canning adventures, this time around I had a major oversight.  Creating the double batch of limoncello called for 20 large organic lemons, but only utilized their skins.  Leaving us with the juice of 20 large organic, and *very expensive lemons* which we didn't want to waste.  So in the midst of our already large project, I added in a few extra recipes to help use up that juice.  A batch of Honey & Lemon Jelly and two different versions of Lemon Pickles. The jelly recipe came from Pomona's Pectin, and was so simple to make.  I used the option of 1 cup of honey, rather than 2 cups of granulated sugar.  The lemon flavor is bright and fresh, but the honey certainly comes through as well, tempering what might otherwise be too tart.  The batch made 4 1/2 jars, so I've been enjoying the partial jar.  It's lovely on english muffins and scones.  Now that I've tried this one, I want to give their Black Tea Jelly a shot.

If you haven't tried using Pomona's Pectin yet, I really recommend it.  You are able to use very little sweetener, and sometimes no sweetener at all, making for much healthier recipes.  You are also able to use any variety of sweetener in each recipe such as honey, turbinado, demerara, moscavado, stevia or truvia.

Then there were the Lemon Pickles.  The highly annoying pickles which had me grumbling by the time I finished them.  The first Lemon Pickles recipe came from the Ball Complete Book of Home Preserving, which called for 14 cups of cucumbers & 4 red bell peppers, and promised to make 6 pints of pickles.  Yeah, that didn't happen.  The brine created by the recipe was only enough to fill 3 very well packed jars of cucumber slices.  This is the first recipe that I've ever made from the Ball book that didn't come out as promised.

So now I had about 10 cups of leftover cucumber slices and bell pepper strips, but I had used up the last of my fresh lemon juice.  I did some searching online and found an alternate recipe on the blog From the Garden Table, which called for bottled lemon juice.  I am quite happy to say that this recipe came out exactly as described, creating 4 more pints of pickles.  I haven't been able to taste either recipe yet, as both stated you should wait 6-8 weeks to let the flavors mellow before eating them.

Now we were back to our regularly scheduled canning with a batch of Lemon-Sage Wine Mustard, from both the Ball book and freshpreserving.com.  This was a nice simple recipe that went together easily.  It made 6 jars, 2 of which didn't seal.  I used one of the unsealed jars to make a great Maple & Mustard Pork Loin, and it was wonderful.  It did make me realize however, that I seem to have a higher percentage of jars not sealing when making mustard, than any other type of canned food.  I'm really wondering why that is, since I carefully measure headspace and always wipe down jar rims.

Next we did a batch of Bourbon & Brown Sugar Mustard, which came from Kaela Porter of the blog Local Kitchen, by way of a guest post on the blog Food In Jars.  Even though it's highly popular, I have avoided the Food in Jars blog since I wasn't impressed with her first book or the fact that none of the recipes came out right when I tried it out in 2013.  But I decided to give her guest blogger a shot and I'm glad I did.  The mustard is delicious on a nice turkey & bacon sandwich.

The last recipe we made was a double batch of the Sweet Onion & Maple Conserve that we made last year.  We noticed while making it, that it takes much longer than the 20 minutes indicated, for the onions to cook down and the liquid to evaporate.  In fact it took us a few hours!  The onions just continued to give up more and more liquid, and become softer and softer.  With all the liquid in the pot, uncovered and over a medium heat, it took about 2 hours for the liquid to cook off.  I did some investigating on the web, and this seems to be a problem for other home canners too.  No one seems to have come up with a solution for the problem, and it did eventually cook down enough, so my advice is to simply plan for this to be a lengthy process.  The conserve really is worth it.  I served it over a fantastic Maple & Mustard Pork Loin when we had friends over last week, and plan to use some more of it on burgers tonight.  The double batch made 10 jars, but 3 of ours didn't seal.

Anyone else canning anything this season?