I have had the same set of placemats on our table, since my husband and I got married 10 years ago.  They were a gift from my mom, whom I later found out, had stolen them from my brother.  Sort of.  Turns out he left some stuff at her house when he moved, and she decided he wouldn't want them anymore, and gave them to me.  I moved halfway across the country with them, only to get an angry call from my brother later.  Admittedly, I never bothered to mail them back.   Mostly because they were beaded, and unable to be folded up to go in a box.  But 10 years later, and the wooden beads they are composed of, are starting to fall off, and it's getting annoying. 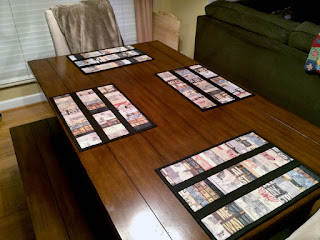 In thinking about it, I realized how ridiculous it is that I've never bothered to MAKE myself a set, and it was time to rectify that.  I was inspired by TheMistressT's Humongous Stash-busting, Scrappy, Place Mat Project posted on Craftster,  so I dug through my stash, and came up with a layer cake of 12" squares of Tim Holtz fabrics that I found on clearance for about $6 at Joann's last year.  I sliced and diced them to various widths, mixed up the strips, and sewed them all back together.  Then I cross cut the large panels, laying in perpendicular stripes of black, before backing and quilting them.  The backing was cut 1" larger all the way around, and folded over to become a self binding. 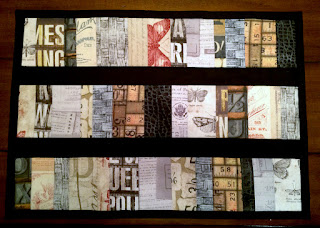 The backing and batting both came out of stash as well, so it was a good project for using up extra fabric, as well as those narrow bits of batting I always have left over from making quilts.  I'm pretty pleased with how they came out, and kinda can't wait to have friends over for dinner now.  I have some chunks of the strip panels left over, and I think I might make some mug rugs and coasters to match, since the dining area and living room are one big open room. 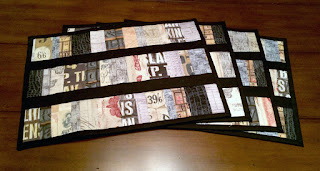