I recently participated in the Fairytale Swap on Craftster.  My partner itsmereba mentioned that Briar Rose was one of her favorite fairy tales, and I got the idea of creating a scarf reminiscent of the rose vines that surround the castle in the story.  I wanted it to be something she could wear in the mild winter of TX, but that could also be displayed decoratively like a garland in the summer.  I searched around, certain that someone had created a pattern like I was dreaming of, and found the Belle Fleur Scarf by Michele Wilcox/Stitch Nation.  The roses are made from Bernat Satin in Bordeaux and Yarn Bee Soft Secrets in Rosebud, and the vine and leaves are Lion Brand Heartland in Joshua Tree. 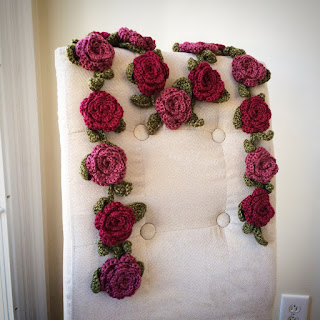 I will warn that while the picture makes the scarf look simple, it was actually much more fiddly than I was expecting.  The vine and leaves are created with a foundation chain, then slip stitching all the way back down, making leaves along the way, then slip stitched again back up the other side, again making more leaves on the way.  While none of it was difficult per se, I find slip stitching in such a skinny area a bit tedious, especially when the yarn wants to turn around on itself.  The roses were just plain crazy.  I read the pattern, and tried to follow it, but it didn't make sense at all, so I checked other users comments on Ravelry, and discovered that most people didn't understand what the pattern wanted you to do.  After a lot of frogging and retrying, I did finally figure out the pattern as it was written, but I wasn't very impressed with the finished rose.  It wasn't as big and full as I'd like, so I dug around on Youtube until I found a tutorial I liked by simplydaisy, then altered her method a bit to make the roses just a pinch bigger by adding 6 more petals made from triple crochet stitches.  I've included my rose pattern below.

5 sc, sl st. (This is 1 single crochet shell.) Repeat 2 more times, for a total of 3 sc shells. After slip stitching in last space, fasten off, and leave another long tail.

Working from the sc shell end, start twisting the work into a flower spiral. Use the long tails of thread to sew the petals in place.