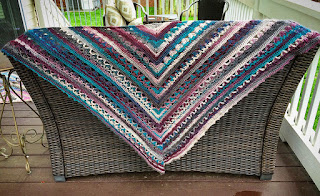 After making my first virus shawl, I was asked by a few other hookers over on Craftster, to start a virus shawl-along.  So I did, and I enjoyed seeing other folks try the pattern for the first time, but I kind of thought that the craftalong would peter out after people had tried it once or twice.  The group of folks involved are some of my favorite people on Craftster, and I should have known better than to doubt them!  A few weeks back, after we had each mentioned other shawl patterns we wanted to try, and shared links of our other work with each other, someone suggested changing our focus to be on shawls in general, instead of based on a specific pattern. 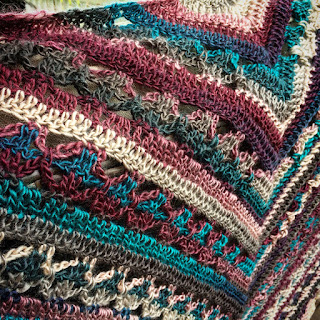 Everyone seemed keen on the idea, so I did that too.  Soon we had a long list of new patterns suggested by the members, and the thread became one of the most active that I follow outside the HP Craftalong.  Then I was inspired by kittykill's hoopla-along, to add a challenge element.  Instead of the monthly challenges she holds on the Needlework board, we decided to try 4 month long challenges, to give folks plenty of time on intricate patterns.  Our first challenge theme was picked at random from the list of suggestions, and was craft from stash.  Most folks are excited about it, though I admit, I'm having trouble with it because I generally don't keep that much stash yarn around, that isn't for a specific project. 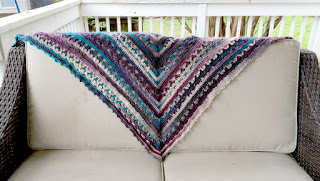 And in the midst of all this, plus resetting my studio and working on stash busting from all my supplies, I had to go to Michael's to pick up some frames.  I was almost safely out of the store, when I passed a bin of clearance yarn, including 5 skeins of Unforgettable in Tealberry, and 5 more in Polo.  Since I've been lusting after both colorways for ages, I snapped them up.  So now, instead of stash busting out a shawl to fulfill my own challenge, I've increased my stash by 10 skeins of yarn! 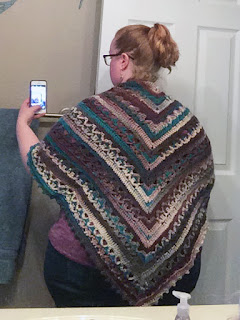 Rather than allowing it to end up in a drawer or bin, languishing, I decided to whip up a shawl for my mom, who always seems to be cold lately.  The pattern is the Lunar Crossings Shawl by Crochet Kim.  I love how quickly and easily it worked up.  I used 2.6 skeins of  Red Heart Unforgettable, in Tealberry, and it's a generous size.  I did 6 full repeats of the motif, then on the 7th I did rows 7-11 as written in the pattern, then added a row of single crochet, placing 4 sc in the point.  After that I added a row of modified picot stitches, starting with a picot in the first space, then doing 3 sc, repeating to the point where I started the picot in the 3rd sc and completed it in the 3rd sc so it would be centered, then continuing as before.  To do the modified picot, ch 4, then place your hook in the left side of the 'V' of the first ch, AND through the top of the next stitch (3 loops on hook), yarn over, and pull through all 3 loops.
Posted by Jennie at 3:14 PM