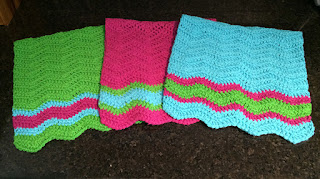 While I was putting away some yarns yesterday, I came across a partially finished dishtowel in my drawer of cotton yarns.  I had started a set of 3 dishtowels when we were in the process of buying our house back in 2016.  The colors were inspired by a dichroic glass sculpture a neighbor had given me for our new home, that contained shimmering pink, blue and green.  The pattern is a free one from Lion Brand called Cottontail Dishtowels, and the yarn is Lion Brand Kitchen Cotton, which I don't really recommend because it splits like crazy.  Update: I LOVE how well this cotton works as a dishcloth.  It's thick and sturdy, and great at scrubbing pans.  It might be a pain to crochet with, but it's a dream to clean with.

Back in 2016 I had finished the first one, and had gotten through 2/3 of the second one, before abandoning it due to the move and from frustration.  The cotton is the Lion Brand Kitchen Cotton which splits like crazy as you work.  And evidently I was using a wooden hook that had a very sharp point, which kept getting caught between the strands, making the problem worse, but all my other hooks in that size had been packed.

Since I really needed some space in that drawer, I decided to take an hour or so, and finish the in-progress towel.  While I was at it, I put on The Keepers on Netflix.  An hour later I had finished the towel, but was HOOKED on the documentary series, so I started on the third towel.  I whipped through that while watching the remaining episodes.  Best part?  I emptied out a bunch of space in that drawer for new dishcloth yarns.