After finishing my Charming Mat I decided to use up some more of the sari yarn in my stash by making a few more mats/trivets/doilies.  I started off with the large sized trivet from the Aunt Aggie's Trivets pattern, made from a magenta sari silk.  I didn't have enough yarn to do it exactly as written, so I did Rounds 1-6 as written, then a row of 8 single crochets per chain space.  I like how it looks like a primitive sunburst.  It measures 13" across, and I think it would be nice under a plant or under a decorative bowl on a table. 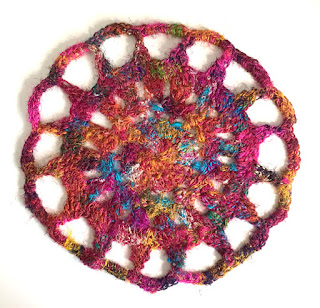 Finally I had a few balls of a red-orange silk that had some breaks in it when I balled it, so I decided to try some of the smaller trivets in the pattern. I started the size small, but it looked awful in such a busy yarn, so I frogged it and went with two of the medium sized trivets instead.  They are each 9.5" across.  Due to the thick & thin nature of the yarn, the final round of the pattern was a bit too bulky, causing a wavy edge to them that I didn't like, so I ended up skipping two of the single crochets per petal in the final round.  (Specifically in the first and last sc of the previous rounds.) 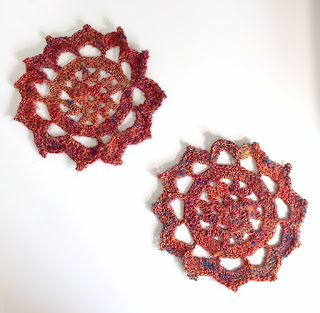 Not exactly sure what I'm going to do with all of these, but they will either go into my shop, or into my stash of handmade holiday gifts.