Rainbow Sun Catcher for My Porch 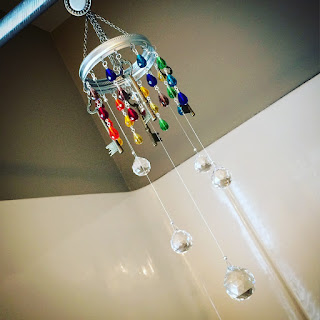 After making a set of Antique Silverware & Key Wind Chimes for my mom for Mother's Day, I had a lot of bits and bobs that I had pulled out for it on my work desk, so yesterday I set about turning them into something.  I had 4 smaller prisms, and 1 larger one, that I decided to turn into a sun catcher for my porch.  I didn't want the crystal prisms to knock into one another, so I staggered the lengths of beading wire I used to string them.  I used a wide mouthed canning jar band as the base, and some chain to suspend it. 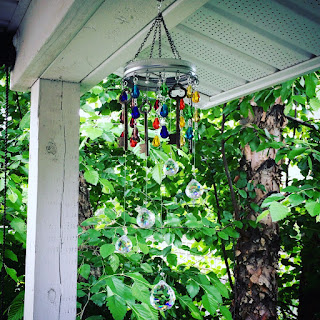 After getting the prisms in place, the piece felt a bit bare, so I added some old key charms that have been in my stash for years.  I bought them to use in jewelry, but when I ordered them the listing didn't note that they had bible verses on them, and I'm not religious, so they were just gathering dust.  After that I added some teardrop crystals in a rainbow of 8 colors.  Strands of a single color felt a bit sedate, so I ended up rotating the colors in each row, so the rainbow sort of swirls around the piece, mirroring the swirling length of the prisms.  Since a pair of wind chimes I had on the porch had recently fallen apart, I already had a spot just waiting for this piece.
Posted by Jennie at 12:12 PM