Since I started renovating my studio a few months ago, I've been rediscovering all kinds of supplies in my stash that I had forgotten about.  One of those was 3 balls of ribbon yarn that I bought in grad school for a costume design project, and never used.  I'm trying to use up some of this stuff to make more room in my new drawers, but had a really hard time with this yarn.  There just weren't a lot of ideas out there for what to crochet with ribbon yarn, which feels weird as something like a scarf or hat.  After some searching on Ravelry, I found this Eco Warrior Market Bag pattern. 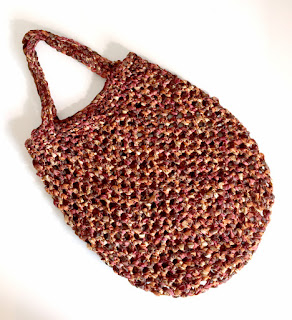 I worked the pattern as written, but when I was done with the body of the bag, it was way too small.  (Something that was apparent while working on it, but the pattern says it will stretch a lot, so I tried to give it the benefit of the doubt.)  I ended up frogging the last few rows, then repeating the Row 11-19 section (the same stitch pattern over and over) up until row 30, then I did two rounds each of Row 20, 21 & 22.  Here it is with 4 skeins of yarn in it.  The first version barely held 2 skeins.  I think if I were to do another one, I'd do another round of 6 increases so it was bigger around, as well as tall. 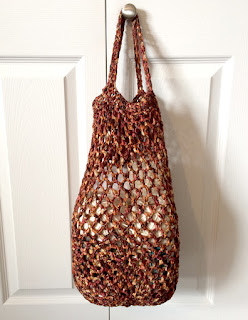