I finally finished my monster afghan!   I made it for my couch, mainly for my husband during his occasional couch naps.  I've had a small lapghan that [member]pinkleo[/member] made me years ago on the back of the couch, and Jim would snuggle with it whenever he's there watching tv or playing video games.  Problem was that pinks made it for 4'11" me, and not for 6'3" Jim.  It basically covered his feet to mid-thigh.  This afghan on the other hand is HUGE, and can snuggle him from just under his chin, to all the way past his toes, and tucked around under his feet.  It's just shy of 5' wide, and a bit over 7' tall! 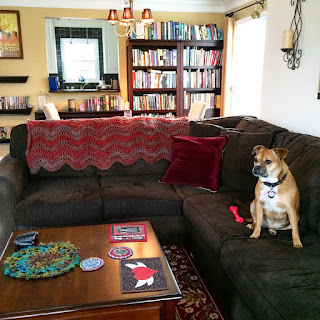 The pattern is the Chunky Feather & Fan Throw, and is free.  I tried the 15mm hook that the pattern recommended, but I didn't like how it was coming out, so I switched to a 12mm, and it was fantastic.  Still a little bit lacy, but not so much that Jim will put fingers and toes through it.  Since I went down a hook size though, I did alter my afghan to be 1 scallop wider.  (This is done by simply adding 17 ch to the foundation chains, for each extra scallop you wish to add.) 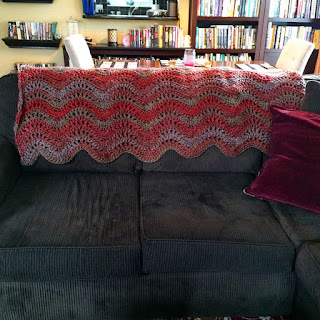 The yarn is Caron Tea Cakes in Pumpkin Chai.  Caron discontinued it, so I bought all 7 cakes they had on clearance at Michael's for $4.95 each and assumed that would be plenty, since several folks I had seen make one on Ravelry had used 6 cakes. But with the addition of that extra scallop, by the time I got through 6 cakes, I could tell that my afghan would basically be a square rather than a rectangle, so I went in search of a few more cakes.  Found a bunch on eBay being sold for a fortune, and bid on the cheapest which was $13 plus shipping.  The seller then contacted me and offered me 2 cakes that she had lost the bands for, for just $8 with shipping!  Woot!  So overall it ended up being 9 cakes, about 1836 yards of super-bulky weight yarn. 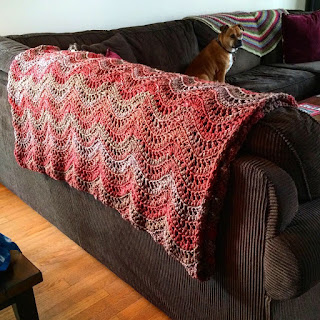 The only thing I disliked about this project, was the sheer size.  It took up my entire dining table when I was working on it, and it was too big for any of my project bags.  I'm so glad it's out of my WIP pile, and finally in its new home on the couch. 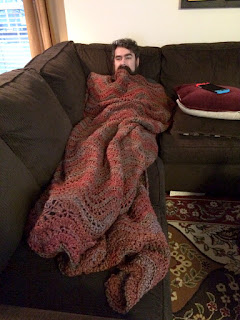