Finally finished my Secret Paths Shawl!  I started it back in August, and it ended up getting pushed aside so I could finish a graphghan for a friend's wedding, and then for holiday crafting.  While I do love how it looks, I probably would not use the yarn again.  It's Lion Brand Wrap Star, in the color Fergie.  It's a strange yarn; 4 individual strands of lace weight yarn, held rather than spun, together.  It starts as 4 strands of teal, and eventually one of the strands is replaced by purple, then later two and two, and on and on to create the gradient effect. It's a wool & acrylic blend that was very annoying to work with, due to the static that would build up. 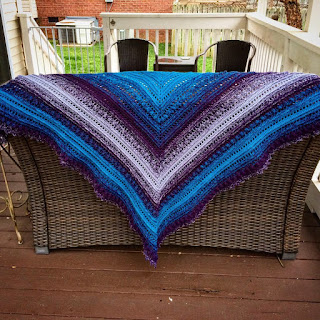 I crocheted the entire first cake as is, then the second cake from the opposite end, so I could have the thick band of grey in the center.  Then I used 2 more cakes, that I alternated between so I could get longer runs of the gradient.  When I got to the end of the written pattern, it was no where near big enough to move on to the border, so I did another repeat of the pattern, which resulted in a rather large shawl.  I probably could have fudged it to leave out 3 rows of the repeat for a more average size, but overall I'm happy with how it looks.  And most of all I'm so happy to have this WIP finally done! 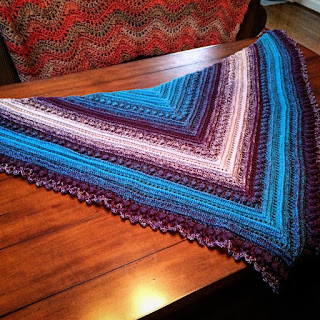