Her Craftiness Knows No Bounds (Mostly)

While everything that I've shared thus far has been a jewelry project, beads and charms are not my only medium.  Far from it.  I've been asked many times "What crafts do you do?" I tend to answer with a cheeky "I've never met a craft that I didn't like," because I don't want to bother listing all the crafts that I enjoy.  (Except perhaps knitting.  She and I did not get along.)  The truth is that between being raised by a very DIY mom, being naturally interested in traditional crafts, and my education in costume design & construction (not to mention props and scene painting), I've learned a great many techniques that I pull from every day, and I am constantly adding to my mental list of new things to try.

I learned to quilt as a small child, and had my first sewing machine in grade school.  I taught myself to sew clothing and costumes by using Simplicity patterns throughout high school.  By the time I was studying costume design in college, I wanted a craft to do at the end of the day to help me unwind, and so I picked up crochet.  Over the years I've taken classes in cake decorating, basket making, corsetry, painting, and floral design.  On my own I've made forays into altered art, shrines, paper crafting, soap making, canning, and just about anything else that strikes my fancy on a given day.  Why all this background?  So that you won't be surprised as new projects show up here, including all of these media and more.

My latest side project is for a swap on Craftster.  I'm both organizing and participating in the One Awesome Harry Potter Thing Swap, which requires participants to create a single awesome Harry Potter inspired project for their partner.  Each project must be a large in terms of time spent (minimum 3 hours), and it is assumed to will spend much more than that on your project.   I was lucky enough to snag my friend noodle-bug as my partner and am both thrilled and terrified to be swapping with her.  She is fantastically talented, and I'm afraid of disappointing her.

Both of us dream of living in the Burrow, the home of the Weasley family in Harry Potter.  With that in mind I decided to create a scrappy rug for noodle's home, reminiscent of something that Mrs. Weasley would make for one of her children.  I had previously created an Upcycled Rag Rug out of cotton yarn crocheted around a core of tee shirt yarn, for Abbeeroad in the Invite Your Partner Swap last year, and while I greatly enjoyed the technique, I decided that for this project I wanted to try crocheting the actual tee shirt (or zpaghetti) yarn itself. 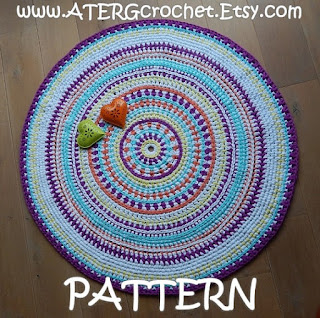 I picked up this beautiful rug pattern from ATERG Crochet on Etsy, then headed out to Joann's to pick up some tee shirt yarn.  Only to discover that no one in the US carries it anymore!  I remember seeing it in all the craft stores a year or two ago, and there are plenty of books out with patterns to make with it, and yet there seems to be no yarn to be had!  For those of you who aren't familiar with it, it is a super bulky yarn, made from the remnants of cotton jersey.  The pattern calls for six 130 yard cones of yarn (4 of various colors, and 2 cones of neutral).  I quickly discovered that while you can order individual spools from Lion Brand for $9 each, you are unable to choose colors in any way, and just have to like whatever they happen to choose to send you!  Thanks Lion Brand.

While I did want a scrappy feel to the rug, not knowing what I was going to get was a bit too scrappy for me, so I started searching the net.  There is very little of it for sale on either Etsy or eBay in the US, but I did find one vendor on Etsy with a decent selection and fair prices.  Ganxxet has 80+ colors, including some really neat prints and stripes. I picked up this adorable print called Brescia, which is a white background with a black, blue and pink print that looks like scribbles of headphones, wings, flowers, hands, and tiny Union Jacks.  It reminded me very much of something Tonks might wear. Sold!  The seller was very helpful, checking a color match for me with the shade of pink that I picked out to go with it, and she shipped it really fast. 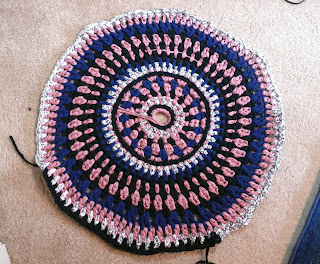 After I came to the realization that I just couldn't afford to buy more yarn, I decided to make my own with this tutorial, in coordinating shades of blue and black.  I picked up some classic rib knit from Joanns, which was on sale for 50% off.  I bought 2.5 yards of black and 1 yard of blue, which came to just $15, and spent a couple of hours slicing, stretching and rolling it.  The very slight rib in the knit became more pronounced when it was turned into yarn, but I like the variation in texture that it offered. 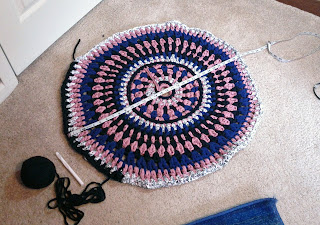 The entire pattern is 32 rounds and should measure 4' across when completed.  I've finished 18 rounds, and it is currently 30" wide.  Since I've officially run out of the Brescia print, and am nearly out of the blue, I'm unsure if I'm going to do the entire 32 rounds, or if I might stop around 25 or so.  As of right now, I'm worried about it being able to fit in a flat rate box to ship to the UK.  After another round or so I'm going to have to start making box checks each time I complete a row to be sure it will fit!